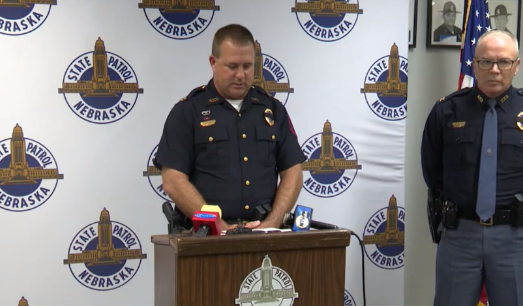 HASTINGS, Neb. (Courtesy of 10/11 News) – The suspect who was shot and killed during a shootout with law enforcement in Juniata overnight has been identified. The Nebraska State Patrol said 35-year-old Brooks Hacker died after firing several shots at law enforcement and wounding a trooper.

According to NSP, Hacker was intoxicated and arguing with his girlfriend when he began firing shots at her Tuesday night. She called 911 around 10:15 p.m. and as a result, NSP Troopers and Adams County Deputies responded. Adams County Emergency Management issued a shelter in place order for nearby residents.

Law enforcement officials established a perimeter around the residence. Approximately 30 minutes after the initial 911 call, Hacker’s girlfriend was able to escape. Next, troopers observed many additional gunshots coming from the residence. Multiple law enforcement vehicles were struck by gunfire. The NSP SWAT Team was activated. Negotiators made contact with Hacker and continued attempts to negotiate throughout the standoff.

NSP said at approximately 1:35 a.m. Wednesday, Hacker continued to fire at law enforcement and struck a trooper in the arm with a single gunshot. Paramedics were already on scene and were able to quickly provide aid to the trooper, who was then transported to Mary Lanning Hospital in Hastings with non-life-threatening injuries.

Hacker continued firing at law enforcement personnel. At approximately 2:35 a.m., law enforcement officials deployed tear gas into the residence. According to NSP, Hacker exited the residence holding a firearm. A member of the NSP SWAT Team then discharged his weapon, striking and killing Hacker.

The injured trooper has since been treated and released from the hospital.