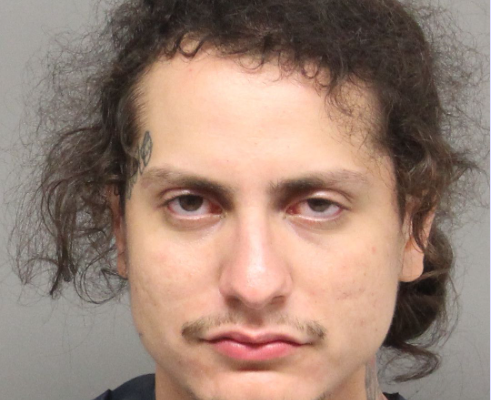 Lincoln, NE (August 5, 2022) A man driving a stolen car was arrested after driving away from a gas station without paying,  Before he was in custody, however, two other vehicles had been smashed up, including a police cruiser, and he had driven through a backyard wooden privacy fence.

— On 8-4-22 at 8:26 a.m. officers were called to the Super C, 3275 Sheridan Blvd, on the report of a
gas drive off. The store employee reported a male with a long ponytail arrived in a white SUV displaying
license plate WWF959 and left without paying for $78.15 in fuel.

— Officer was contacted by a member of the Fugitive Taskforce, who was conducting surveillance in the 200 block of S 28th and observed the described vehicle at a residence with a party still in the vehicle. The taskforce member further believed the White SUV was the 2019 Toyota Highlander reported stolen under C2-066358, on 7-29-22 from the
6000 block of Mesaverde Dr (value $35,000).

— Officers responded to the S 28th street residence, setting a perimeter around the area. When
taskforce members approached the vehicle to attempt contact, the occupant accelerated through the
backyard of the residence, crashed through the backyard wood privacy fence, and collided with the
police cruiser on the perimeter position in the alley. The officer was not seated in the cruiser at the time
of the collision. The damage to the cruiser was later estimated at $5,000.

— After striking the cruiser, the Toyota continued southbound in the alley. As the Toyota continued to flee, it struck an additional vehicle near 27th & J Street, where the driver fled on foot. Officers were able to apprehend 23 yoa
Gabriel G Olivas near 25th & H Street. Olivas was observed to match the description of the observed
driver of the Toyota and was obviously out of breath.

— The white SUV was confirmed to be the stolen Highlander. Olivas was lodged in jail and cited for Theft by Receiving $5,000 or more, Operate a Motor Vehicle to Avoid Arrest, Obstructing a Police Officer, Criminal Mischief, Willful Reckless Driving, and DUI.