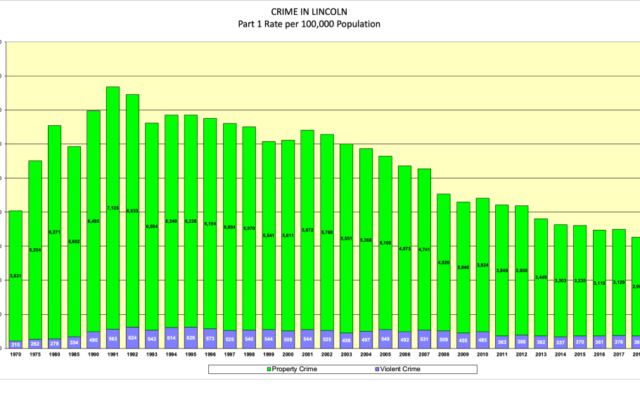 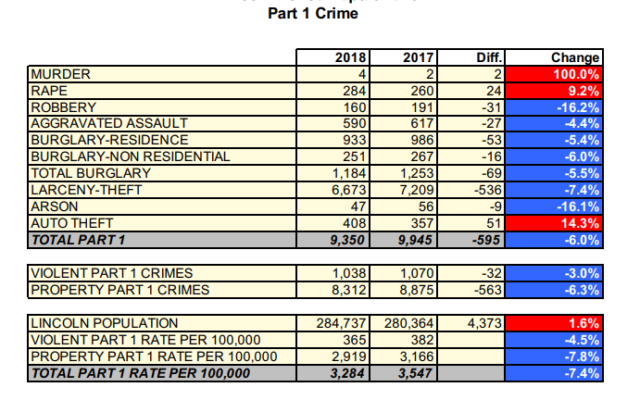 According to data just released by the Lincoln Police Department Thursday, the crime rate was down in 2018 compared to 2017 – continuing a downward trend for the city.

Police Chief Jeff Bliemeister told KFOR News, a significant decrease they saw last year involved thefts. In 2018, there were 6,673 reports of larcenies. That’s down 7.4 percent compared to 2017, when 7,209 cases of theft were reported. Bliemeister credits that in part to the 9 p.m. routine, a campaign started by police officers to remind the public to lock up belongings before they go to bed. Overall though, Bliemeister says it’s more than likely just been a change in habits for Lincoln residents, “People taking ownership. They’re changing their practices. They’re not leaving valuables in their cars. They’re not leaving their cars unlocked. All of those things are driving these numbers down.”

However, there are a few trends Bliemeister wants to see addressed this year. One of those areas involves an increase in cases involving technology analysis. He says although the pervasiveness of technology is helpful in solving cases, it’s stretched some officers in the department fairly thin. “A decade ago we weren’t even tracking it. Last year, we had 531 forensic examinations of computers, tablets but mainly cell phones.”

Bliemeister says right now there’s only one person assigned to process those examinations. And though the pervasiveness of technology aids in solving more serious crimes, it significantly adds to the workload.

Another area that needs attention is with mental health calls, Bliemeister says. He’s hoping the addition of officers to the force over the next few years would help that. “I can’t even hardly describe how that has continued to impact our workforce and our workload,” the Chief told KFOR News. There were 24 percent more mental health calls in 2018 compared to the five-year trend. The rate was up 4.4 percent in 2018 compared to 2017.

You can view the reports below and also at the Lincoln Police Department website.