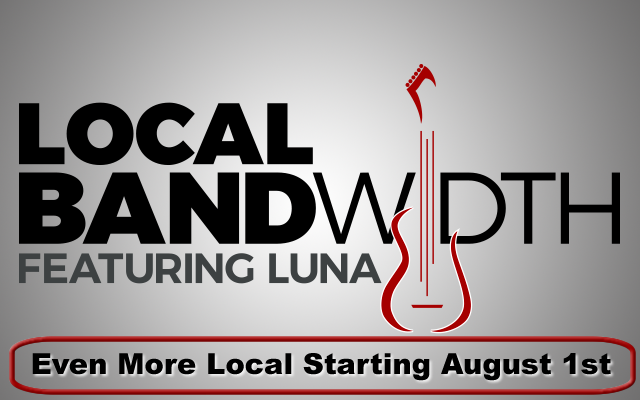 If you missed the announcement on Sunday, Local Bandwidth is expanding to 2 hours starting on August 1st starting at 7pm.

I am beyond excited to be able to give you local music for two hours every week. This has been something I felt the show needed for some time now. And I honestly don’t think an hour is enough, especially right now as things really get rolling with live music. It was a very hard secret to keep for the last few weeks, as I literally squealed when I found out it.

And I want to thank you for making this happen.  All of the bands who make up  the scene and have submitted music for the show, and of course the fans who support not only Local Bandwidth but really the local scene.  I’ve watched the local music scene change and grow for years.  With various venues and bands coming and going.  And what I’ve seen is that through all the changes we have an amazing local scene, with very talented musicians, and a strong fan base.

Remember, almost every band you hear daily on the Blaze started out as a local band somewhere.

If you are already out supporting the local music scene by going to shows, following them on social media, letting them know you’re there, THANK YOU!

If you aren’t, get out there either physically or virtually and let’s keep this scene thriving. Check out Local Bandwidth each week, find new bands to listen to, follow, and enjoy.

And with the extra hour, that means I get to play even more of these local bands!  So if you are in a local band (or solo musician), playing original music, that is some flavor of rock get your submission in! Email [email protected], wav files preferred for a chance to be on the show!

And again, THANK YOU for supporting Local Bandwidth and local music.