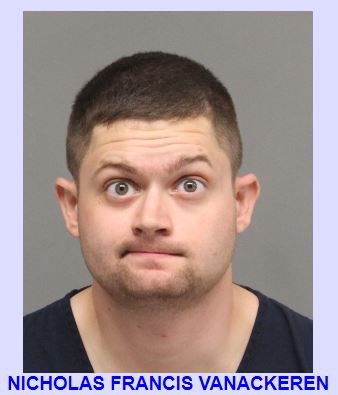 Sgt. Chris Vollmer on Thursday said it started when the suspect, Nicholas Van Ackeren, passed the victim at a high-rate of speed along northbound NW 13th Street, approaching West Fletcher Avenue and almost hit a pedestrian. Vollmer says the victim then flashed his headlights toward Van Ackeren’s vehicle, who then turned into a neighborhood. The victim continued to the U-Stop at 110 West Fletcher, got out and was soon confronted by Van Ackeren, who pulled up behind and threatened to kill him by showing a knife.

Vollmer says the victim ran inside the store and saw Van Ackeren slash one of the tires to the victim’s vehicle. Van Ackeren hit the victim’s car and another vehicle while trying to turn out of the parking lot before taking off.

Van Ackeren was caught at his home in the same area and arrested for terroristic threats, use of a deadly weapon to commit a felony. He was cited for criminal mischief and leaving the scene of the accident.