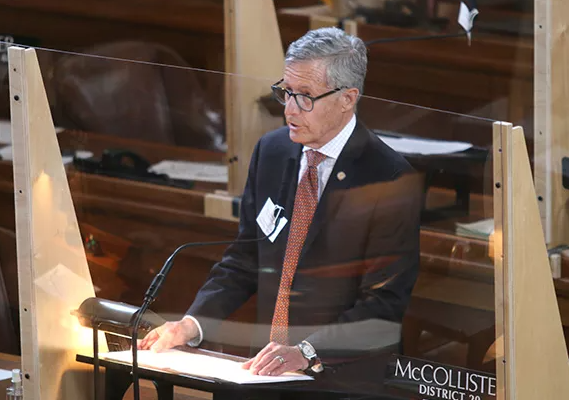 Lincoln, NE (May 26, 2021) The Nebraska Legislature override Governor Pete Ricketts’ vetoes of three bills and all three of the accompanying appropriations bills.

L.B.108, sponsored by Senator John McCollister of Omaha, raises eligibility for the Federally funded Supplemental Nutrition Assistance Program, from 130% to 185% of the Federal Poverty level.

“These are the working poor” said McCollister as he argued for the override.  “They’re the folks working at McDonald’s and Walmart for minimal wages.  They are often disabled, and we need to help them.  Food insecurity shouldn’t occur in this country.”

Senator Tony Vargas of Omaha said the bill would affect approximately 3,900 families across the State.

Arguing against the override, Senator Mike Groene of North Platte charged that the bill would help people become “addicted to welfare.”  Groene argued that it would encourage people not to work.

Lincoln Senator Anna Wishart called Groene’s notion untrue.  “If you are between 16 and 60 years old you are required to work in order to receive these benefits, unless you have a disability or are a student, so the population of 3,900 people that we are talking about are people who are working.

Lawmakers also overrode the Governor’s veto of LB 306, a bill expanding a program that assists low income homeowners.  It increases the eligibility threshold for the low income home energy assistance program from 130 percent of the federal poverty level to 150 percent.  It also requires the state Department of health and Human Services to allocated at least 10 percent of the program funds to weatherization assistance.

The third veto overridden hands control of the Omaha Public Schools Pension Fund to the State Investment council.  The Governor vetoed the bill saying it would place the State’s taxpayers in jeopardy of being saddled with paying for the poor investment decisions of the Omaha Schools.  While most schools across the State have funded their retirement plans at 90% or better of projected liability, the Omaha teachers retirement plan is funded at approximately 65% due to losses in recent years.