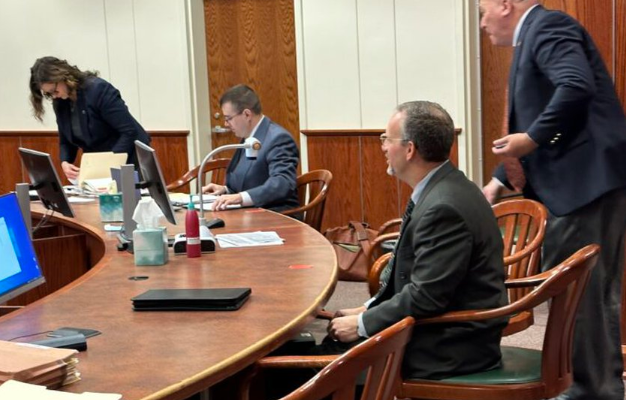 Barger, who lost by 223 votes to George Dungan in Legislative District 26, went to court after Secretary of State Bob Evnen denied his request for a hand recount. Evnen argued that state law requires election officials to handle recounts like elections: with paper ballots counted by machines.

Tuesday marked the latest round in a months-long fight in Nebraska over whether recounts of close elections should be handled by machine or people.

But Barger’s lawsuit may run aground on something simpler than whether Nebraska election law is ambiguous.

Lancaster County District Court Judge Kevin McManaman is considering a question about how the case was filed that could lead him to dismiss it.

Barger said that if the judge tosses his lawsuit on a technicality, he worries he won’t be able to refile the case and get it heard quickly enough to matter.

Jennifer Huxoll of the Attorney General’s Office filed a motion for the state arguing that McManaman couldn’t consider Barger’s filing because of a signature snafu.

One of Barger’s key filings was signed electronically but was not notarized, a step Huxoll said Nebraska Supreme Court rules require before a court can weigh in.

Barger’s attorney, David Begley, said he followed the rules regarding electronic submissions. He tried in court to submit a signed copy. Huxoll objected.

McManaman said he would take the state’s motion to dismiss on the technicality under advisement. A decision could come as early as today.

The judge let both lawyers argue the lawsuit’s broader question: whether state law requires Evnen to carry out the kind of recount sought by Barger, who lost by more than 1%.

Under state law, an automatic recount is triggered if the votes separating two candidates is less than 1%. State law also law requires that such a recount be carried out in the same manner as the election.

Nebraska law is not as specific regarding recounts for candidates who lose by more than 1%, Begley argued. He said different sections of state law and history hint at a preference toward hand recounts.

Huxoll argued that any recount method not specified in state election law reverts to the secretary of state’s discretion as the administrator of elections. Begley disagreed.

“If the Legislature wanted the same procedure used on a recount as during the election, it would’ve used the same language,” Begley said.

McManaman appeared to side with Huxoll, who argued that there is no explicit language detailing how those sorts of recounts should be handled.

“The court is right,” Huxoll said. “The law does not spell that out. Supervision is discretionary language.”

Lancaster County Election Commissioner Dave Shively sided with Evnen, saying the secretary of state has the administrative choice on how to handle recounts outside the 1% automatic trigger.

Barger would have to pay for any recount outside the automatic margin. The Secretary of State’s Office estimates a hand recount could cost $11,000. A machine recount would cost about $6,000.

Barger has said his campaign is trying to raise $25,000 to cover the recount costs and any legal fees.