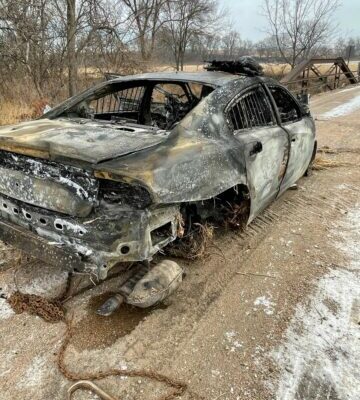 (KFOR NEWS  January 10, 2023)  A Saunders County Sheriff’s Deputy has been released from the hospital.

Dominic Leuck’s cruiser crashed in a ditch Friday night and caught fire while following a speeder on a county road on Friday.  Deputy Leuck is recovering from a fractured rib, torn ligament in his ankle, a fractured cheek bone, bruising of his lungs, a concussion, bruises, and lacerations.

On January 6th, Deputy Leuck attempted to initiate a traffic stop of a vehicle that was speeding on Hwy 79 near County Road N.  The Deputy lost visual contact with the suspect vehicle which had went out of control and rolled into a field.  The Deputy then lost control and ended up in a creek at which time the cruiser caught fire and was engulfed in flames.

The suspect, 26 year old, Dustin A. Hayes of Prague, NE sustained minor injuries and was taken into custody and transported to Saunders County Corrections after medical clearance.  Deputy Leuck sustained serious injuries and was initially treated at Saunders Medical Center and later transferred to Bergan Mercy Hospital in Omaha for observation.  The Nebraska State Patrol is investigating both accidents.

Hayes was ultimately cited with flight to avoid arrest, willful reckless driving, driving during revocation, possession of marijuana less than an ounce, and speeding.