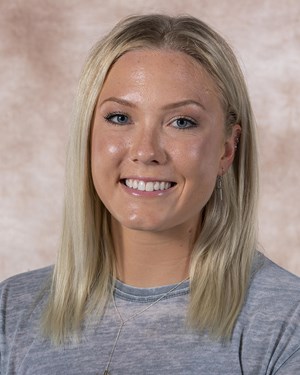 LINCOLN–(NU Athletics Aug. 6)–Nebraska volleyball senior Lauren Stivrins will return to the University of Nebraska for one more season with the Husker program.

The three-time All-America middle blocker announced Friday she will use her final year of eligibility, which the NCAA granted to student-athletes due to COVID-19 interruptions, to spend a sixth season in Lincoln.

“I want to return for another year because I know this is the best place for me to recover and get back to doing what I love most with the people I love most,” Stivrins said. “This year I want to go out on a win, and that means winning the national championship. Having won one already, I know what it takes and how much of a grind that’s going to be, but I think we’re so ready for that. This team is so talented, and I’m really excited to see what we can do.”

Stivrins earned her third consecutive All-America award and second straight first-team recognition in 2020-21, as well as unanimous AVCA All-North Region and All-Big Ten First Team honors for the third straight season. She posted 3.19 kills per set and 1.03 blocks per set alongside a team-best .468 hitting percentage, which led the Big Ten, ranked third nationally and was the second-best single-season mark in school history. The Scottsdale, Ariz., native had double-digit kills in 11 of 18 matches played.

“Our staff is so happy Lauren is coming back for a sixth year,” Head Coach John Cook said. “She’s so much fun to coach and someone you want in the gym, and this is awesome news for our program.

“We’ll all need to be patient as Lauren works back into volleyball shape. We will make sure we do not rush her and look forward to the day she can be out there on the court.”