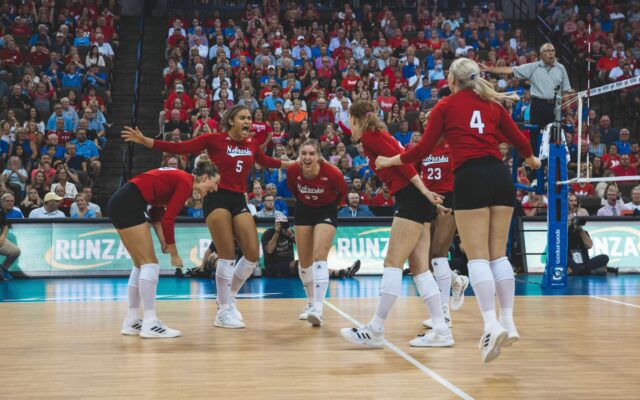 Whitney Lauenstein had a career-high 25 kills to lead the Huskers, while Lindsay Krause totaled a career-high 16 kills. With Nebraska trailing 5-4 in the fifth set, Krause had three kills and a block in the span of five rallies, giving the Huskers an 8-6 lead they would not relinquish. After Creighton pulled to within one at 9-8, Krause delivered another kill to push the lead back to two. A service error gave Creighton the next point but Nebraska scored the final five points of the match, including back-to-back kills from Lauenstein to set up match point. Freshman Hayden Kubik – who also set a career high in kills with six – finished off the Bluejays with a kill.

Lauenstein’s 25 kills were the most by a Husker in a match since Mikaela Foecke in 2018, and Lauenstein hit .385 in the match. Krause had four of her career-high 16 kills in the fifth set. Madi Kubik joined the sophomores in double-figure kills with 14, and she added a double-double with 12 digs. Freshman Bekka Allick had a career-high nine kills as Nebraska produced 78 kills in the match, 17 more than Creighton (61).

The Huskers hit .244, out-blocked the Bluejays 9-7 and won the dig battle 93-89. Kaitlyn Hord led all players with six blocks and five Huskers finished with double-digit digs, led by 18 from Lexi Rodriguez and 17 apiece from setters Nicklin Hames and Anni Evans. With her 17 digs, Hames moved to fourth all-time in school history with (1,421) digs. On Wednesday night she moved past Kenzie Maloney (1,406) and Jordan Larson (1,410).

Creighton won the battle at the service line as the Bluejays had three aces and only five service errors. Nebraska committed 10 service errors and did not have an ace, marking the Huskers’ first match without a service ace since Nov. 2, 2019 against Penn State.

Nebraska improved to 6-0 with the win, while Creighton fell to 5-2 on the season. Keeley Davis paced three Bluejays in double-figures kills with 19, and she was one of five Creighton players with double-digit digs.

Set 1: Lauenstein pounded three kills and added a block to help the Huskers to a 7-4 lead. But the Bluejays scored the next three points to tie the set at 7-7. Four straight kills – by Krause, Hord, Lauenstein and Batenhorst – put the Huskers up 13-9 and forced a Creighton timeout. After the break, Creighton hit long and then Lauenstein put down her fifth kill on five swings to make it 15-9. Hord powered down two kills to put the lead at seven, 18-11, and an incredible bump set by Knuckles from well beyond the baseline found Kubik for a kill that made it 19-11. Allick posted a pair of kills to keep the Huskers in front by eight, 23-15. The Huskers won the set 25-18, hitting .286 and holding Creighton to .032. Lauenstein had seven kills on .600 hitting. Allick was a perfect 3-for-3, and Hord and Krause each had three kills.

Set 2: Lauenstein blasted four early kills as the Huskers went up 5-3. But Creighton used a 5-0 run to go up 11-7. Hayden Kubik ended the run with a kill, and Krause followed up with her fourth kill before a block by Hayden Kubik and Hord cut it to 11-10. The Jays answered though and regained a 15-12 lead after a kill by Sis. NU trailed 16-13 when Allick set Lauenstein for a kill, and Creighton committed two attacking errors to tie the set at 16-16. But Creighton held off the Huskers and remained ahead by two points at 21-19. A service error pulled Nebraska within one, 21-20, and Madi Kubik found the floor to tie the score at 21-21. After a Creighton timeout, the Huskers committed their fifth service error, but Lauenstein tipped her 15th kill to even it at 22-22. Madi Kubik then connected off a set from Hames for a 23-22 lead, the Huskers’ first since it was 7-6. A Husker hitting error tied the score at 23-23, but Creighton served long for set point for the Big Red, and Krause put the finishing touches on the comeback with her seventh kill and a 25-23 win.

Set 3: Hayden Kubik had back-to-back kills to put the Huskers up 8-7, but Creighton scored three in a row to take a 10-8 lead. Hames set Lauenstein and Kubik for back-to-back kills to tie it at 10-10, but the Huskers committed four straight unforced errors and fell behind 14-10. Madi Kubik struck a pair of kills, and Allick and Krause teamed up for a block to cut it to 15-13. Creighton went ahead 18-14 when Krause smacked back-to-back kills and Hayden Kubik hustled to keep a ball alive that led to a Creighton hitting error that trimmed the Jays’ lead to 18-17. Hayden Kubik ripped her fourth kill off a bump set from Rodriguez, and Creighton hit wide to tie the set at 19-19. An incredible defensive effort by the Huskers resulted in a solo block by Hord that gave the Huskers a 20-19 lead, NU’s first since it was 8-7. The teams traded sideouts to a 22-22 tie, but Wait dumped a kill to make it 23-22 Creighton. Kubik terminated on the left pin to tie it again, but a kill by Kiana Schmitt gave Creighton set point. After a timeout, Madi Kubik killed again, and Allick hammered an overpass for match point for the Huskers, 25-24. Creighton answered with two kills to regain set point at 26-25, and a Husker hitting error ended the set in Creighton’s favor, 27-25. It ended the Huskers’ streak of 17 straight set wins to begin the season.

Set 4: The Jays came out swinging and took a 10-5 lead before a Krause kill and a solo block by Allick cut it to 10-7. But Creighton recorded a 6-2 run to go up 16-9. Lauenstein tallied her 22nd kill and picked up a block with Hord, but the Jays remained ahead 19-12 after two Husker errors. The Huskers could get no closer than six as Creighton won the fourth, 25-17.

Set 5: Creighton claimed a 5-3 lead, but the Huskers fought back to tie it at 5-5 after a kill by Krause. The sophomore continued to hammer away as two more kills and a block with Allick earned the Big Red an 8-6 lead. The Kubik sisters connected as Madi set Hayden for a kill that made it 9-6, but Creighton scored the next two to cut NU’s lead to 9-8. After a Husker timeout, Krause tooled a block for a new career high in kills and a 10-8 lead, but a service error made the lead just one again. After a net violation on Creighton, Madi Kubik put down a kill from the back row to give the Huskers a 12-9 lead. Lauenstein then blasted back-to-back kills for match point at 14-9. On match point, Hayden Kubik tooled the block to cap Nebraska’s match-ending 5-0 run.

Up Next: The Huskers are back at home on Saturday as they host Long Beach State, coached by former Husker assistant Tyler Hildebrand, at 3 p.m. at the Bob Devaney Sports Center.