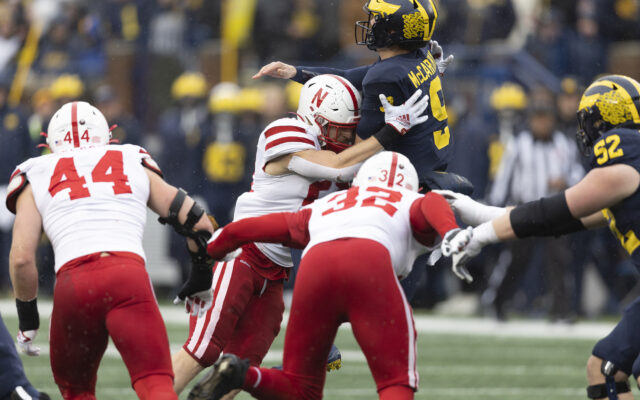 ANN ARBOR, MI–(NU Athletics Nov. 12)–Nebraska got a second-quarter field goal to pull within 14-3, but the Huskers were unable to get any closer as No. 3 Michigan battled its way to a 34-3 win over the Huskers at the Big House in Ann Arbor, Mich., on Saturday afternoon.

Although Nebraska capped a 12-play, 55-yard drive with a 37-yard Timmy Bleekrode field goal with 4:10 left in the first half, the Huskers lost starting quarterback Chubba Purdy late in the drive following Purdy’s first-down gaining run. Purdy, who made his second straight start in place of an injured Casey Thompson, ended his day with a team-high 39 rushing yards on five carries, while completing 6-of-12 passes for 56 yards.

Logan Smothers came on in relief of Purdy and completed 4-of-8 passes for 15 yards the rest of the way, while adding one yard on four rushing attempts against a stout and aggressive Michigan defense. For the game, Nebraska (3-7) managed just 146 total yards against the Wolverines.

Michigan (10-0) controlled the game with its defense and a powerful running game that featured 162 yards on 28 carries from Blake Corum, including a two-yard touchdown run in the first quarter to give the Wolverines a 7-0 lead. C.J. Stokes added 68 yards on eight carries for the Wolverines, who amassed 264 yards on the ground among their 412 yards of total offense.

Nebraska’s defense limited Michigan quarterback J.J. McCarthy to 129 yards on just 8-of-17 passing, including four connections for 72 yards to Ronnie Bell, who pulled down a nine-yard touchdown pass in the second quarter that gave the Wolverines a 14-0 lead.

The Huskers responded following Michigan’s second score, as Purdy opened the ensuing drive with a 13-yard run. Three plays later, Purdy completed a 13-yard pass on 3rd-and-6 to Alante Brown, who finished the play with a highlight reel hurdle to convert for a Big Red first down.

On the next play, Nebraska moved 15 yards on a roughing the passer penalty on Michigan, before Purdy picked up seven more yards on the ground. Purdy made another third-down play with his legs, scampering eight yards on 3rd and 3 to set the Huskers up with a 1st and 10 at the Michigan 15. But Purdy was injured on a half slide at the end of the run and did not return.

Smothers came in and finished off the drive with the final three plays from scrimmage to set up Bleekrode’s 37-yard field goal cut the Michigan margin to 14-3.

Michigan responded with a 30-yard Jake Moody field goal to end the half with a 17-3 lead, then outscored the Huskers 17-0 in the second half.

Ernest Hausmann led the Nebraska defense with a career-high 10 tackles, including a sack, while Luke Reimer matched Hausmann with 10 tackles of his own.

Neither team committed a turnover, and the two squads combined for just five penalties for 45 yards in the contest.

Nebraska returns to home action next weekend when the Huskers play host to Wisconsin at Memorial Stadium. Kickoff is at 11am Saturday on ESPN.