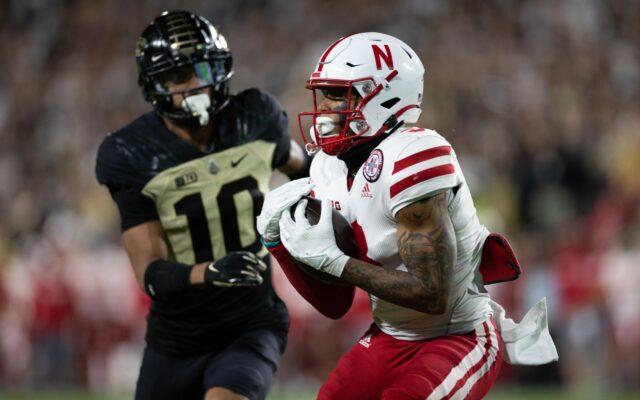 WEST LAFAYETTE, Ind.–(NU Athletics Oct. 15)–Nebraska offense tallied 476 yards of total offense, but Purdue led with 608 offensive yards in a 43-37 win over the Huskers at Ross-Ade Stadium on Saturday night.

Malcolm Hartzog got the Huskers off to a strong start, intercepting a pass from Boilermaker quarterback Aiden O’Connell in the opening drive of the game, but Purdue was able to hold the Huskers scoreless in the first quarter while getting off to a 10-0 lead. A two-yard pass from O’Connell to TJ Sheffield and a 37-yard field goal from Mitchell Fineran led Purdue into the second quarter.

The Huskers responded early in the second quarter as Jaquez Yant rushed for a one-yard touchdown with 13:16 to go. After holding the Boilmakers on the next drive, NU was able to tie the game at 10-10 with a 36-yard field goal from Timmy Bleekrode.

Purdue followed with 17 unanswered points before the half. A 31-yard touchdown pass from O’Connell to Charlie Jones gave the Boilermakers the lead, while a 37-yard field goal, a one-yard rushing touchdown from Devin Mockobee and a 43-yard field goal extended the lead at the end of the second quarter.

The Huskers came out of the half strong, scoring on the opening drive of the third quarter. Trey Palmer scored a touchdown on a 37-yard reception from Casey Thompson.

After Mitchell Fineran missed a 41-yard field goal attempt, NU took over on the Nebraska 24. Despite a 60-yard rush from Palmer to start the drive, the Huskers settled for a 22-yard field goal.

NU’s defense was unable to stop O’Connell as he went 75 yards in six plays, scoring a touchdown on a 28-yard passing touchdown to TJ Sheffield.

Thompson responded quickly, going the distance in two plays and 32 seconds with a 72-yard pass to Palmer for his second touchdown of the quarter. Despite only having possession for 3:03 of the third quarter, the Huskers were able to outscore the Boilermakers, 17-7.

After Thompson recorded his second interception of the night, the Boilermakers were able to add six more after a two-yard touchdown pass from O’Connell to Charlie Jones made it a 43-30 game. Fineran missed the extra point attempt.

Thompson again looked to Palmer to go the distance and quickly. Thompson completed the 64-yard pass to Palmer. At Purdue’s own six-yard line, Grant rushed up the middle for the touchdown.

However, the Huskers were unable to hold the Boilermakers in their final drive, recording the 43-37 loss.

The Husker offense totaled 476 yards, with 354 passing yards and 122 on the ground. Casey Thompson completed 16-of-29 passes for 354 yards, two touchdowns and two interceptions. Trey Palmer pulled in seven catches for 237 yards and two touchdowns, while also recording 60 rushing yards. Palmer’s 237 receiving yards marked the most in a single game in Nebraska history.

The Big Red held the Boilermakers to 608 yards, with 391 passing yards and 217 yards on the ground. Myles Farmer and Isaac Gifford both led NU with nine tackles while Nick Henrich added one tackle for loss. Malcolm Hartzog snagged an interception for the third game in a row.

Nebraska will regroup during a bye week before returning to Big Ten action at Memorial Stadium against Illinois on Saturday, Oct. 29.