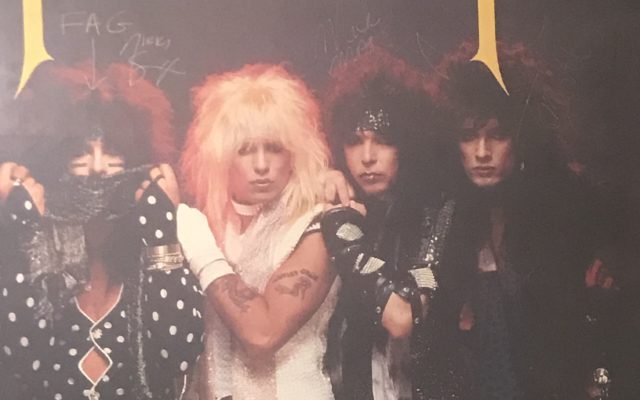 I’ll never forget the first time I caught Motley Crue live. They opened for Ozzy at the Civic Auditorium in Omaha March 10, 1984. I’d never heard of the band before so I was really going to see Ozzy. We piled into my friend Brians Honda Civic and rolled up to Omaha. Once I heard the Crue play the first note, I was hooked. From that day forward Motley Crue has been my favorite band. Over the years I’ve collected thousand and thousands of dollars in memorabilia. Included in my collection is 1 of 4 Motley Crue Generation Swine Billboards. The billboards promoted the Grammy Awards. The graphic was the cover of the Generation Swine album. The billboards were placed in LA and NY. The other 2 were not put up but put in boxes. I was lucky enough to receive one of them. This is a 15’x25′ full on billboard poster. It’s so big that I can’t hang it up anywhere. I’ve tried to lay it out on the floor but I don’t have enough room to get it completed. Someday I’ll take it to a gym or something to lay it out and get a picture. If it said Motley Crue on it, I bought it. If there were 2 of the same items at the record store, I’d buy both so no one else could have it. I’m crazy like that. Where did this amazing band start? It was January 17th, 1981 when Nikki Sixx and Tommy Lee first jammed together with original singer-guitarist Greg Leon – who was soon replaced with Mick Mars and Vince Neil. IF you watched the movie “The Dirt” you know how that worked. This bands journey has been a long rough road but in the end, they’ve sold millions of records and will go down in history as one of the greatest bands ever.