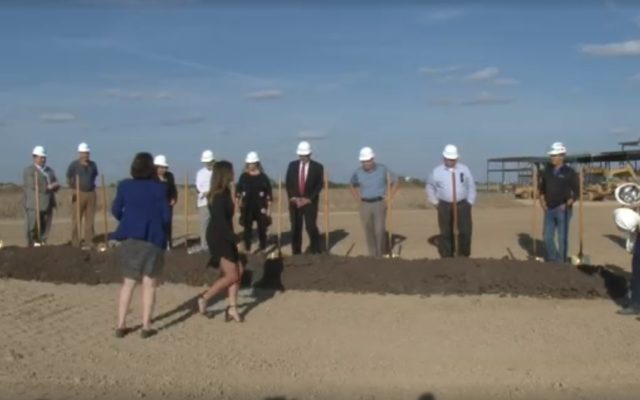 “We gather today to celebrate, to reflect, and to remember that were are on land that, for centuries, has been and still today is, and into the future will be homeland to indigenous people” said Superintendent Steve Joel.  “We are grateful to the Ponca Tribe of Nebraska for collaborating with Lincoln Public Schools in naming this place and the school to be built here.”

The Chairman of the Ponca Tribe, Larry Wright, Junior, called it a great honor:

“It’s a source of pride among our Ponca people, and the honor in this day and age, where many times Indian people feel invisible, to have something like this that will stand the test of time that recognizes one of our own.”

Lincoln School Board President Connie Duncan said the school is also a tribute to the City of Lincoln.

“Standing Bear High School represents the astonishing and healthy growth of our community.  Just look around.  Who’d have ever envisioned building schools this far out in the outskirts of Lincoln?”

School Board member Dr. Bob Rauner, a member of the naming committee, said recommending the name Standing Bear High School was not an easy task.

“There was some thought that this might be a controversial choice and it was a difficult choice, but it was the right choice, and sometimes I think that we learn best when we do something that’s a little difficult and learn that it’s the right thing to do.”

Lincoln Northwest High School is also under construction near the air park, and is scheduled to be open next year. Standing Bear High School is expected to open two years from now.