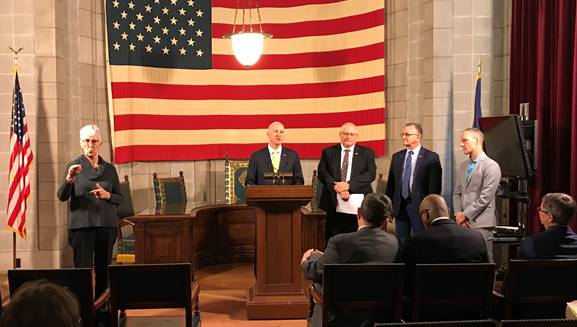 LINCOLN–(AP/News Release Feb. 7)–Gov. Pete Ricketts and business leaders will travel to the United Kingdom and Ireland in August to promote Nebraska businesses on a trade mission that coincides with Nebraska football’s season opener in Ireland.

Ricketts says the trade mission will focus on agriculture, insurance and other major Nebraska industries. It also will allow them to watch the Huskers play Northwestern in person on Aug. 27. Ricketts has led Nebraska business executives and state administrators on trips to Asia, Europe, Mexico and Canada during his tenure, with the goal of helping business leaders build relationships abroad and drawing investments in Nebraska from foreign companies.

Data from the U.S. Census Bureau and U.S. Department of Agriculture’s Foreign Ag Service shows that exports from Nebraska to the United Kingdom and Ireland totaled around $1.065 billion from 2010-2020.  Companies based in the UK also employ 4,494 Nebraskans in 21 communities around the state.

“This is a great opportunity for Nebraska companies seeking to explore or expand in the international marketplace,” said Goins.  “At the same time, they’ll be helping us represent our state’s industries and grow its global footprint.  The resulting investments and partnerships will help strengthen our economy for years to come.”

NDA Director Steve Wellman said he sees room for growth in Nebraska’s agricultural exports to the UK and Ireland, and he encouraged the farming and ranching community to attend.

“There’s a lot of room for growth in ag exports to the United Kingdom and Ireland, particularly in beef, pork, corn, and distillers grains,” said Wellman.  “Farmers and ranchers are the best people to tell the story of Nebraska agriculture and show consumers and agribusiness leaders the quality ag products that Nebraska has to offer.  I encourage Nebraska agriculture representatives to consider joining us on this upcoming trade mission.”

Businesses interested in participating in the trade mission should contact DED’s Cobus Block at [email protected] to apply.  Space is limited.