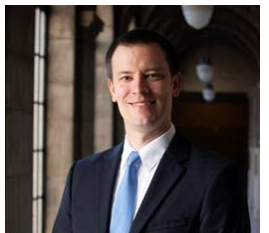 Post, 34, has served as Civil Litigation Bureau Chief for the Nebraska Department of Justice (NDOJ) since May 2017.  In this capacity, he has supervised a team of ten assistant attorneys general that defend roughly 300 new trial court cases per year.  He has also advised agencies on matters pertaining to rules and regulations, employment law, and public health regulation.

Post holds a Bachelor of Arts in History and Political Science from Nebraska Wesleyan University and a Juris Doctor from the University of Nebraska College of Law.  He is a member of the Nebraska Bar Association and the Lincoln Bar Association.

Post is active in the community, coaching youth sports with the YMCA and volunteering as a moot court judge for the University of Nebraska College of Law.  He is also a board member of Matters on Tomorrow, a nonprofit that provides social entrepreneurs with the administrative knowhow and support to launch new ventures.

He fills the vacancy created by the retirement of Judge John A. Colborn.

Homolka holds a Bachelor of Science in Business Administration from the University of Nebraska-Lincoln and a Juris Doctor from Washburn University School of Law.  She is a member of the Nebraska Bar Association.

Homolka is active in the community as a mock trial judge for the Nebraska Bar Association and as a volunteer coach for volleyball and basketball youth clubs.  Additionally, she’s involved in numerous public boards and commissions, including the Governor’s Commission for the Protection of Children, the Nebraska Attorney General’s Human Trafficking Task Force, the Nebraska County Attorneys Association, and the Merrick County Youth Council.

She fills the vacancy created by the retirement of Judge Linda Caster Senff.