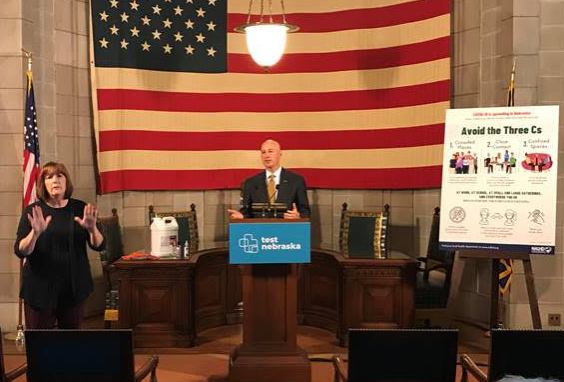 Lincoln, NE (November 5, 2020)  Governor Pete Ricketts held a press briefing at the Capitol this afternoon to provide updates on the State’s pandemic response.  As the virus continues to spread, he urged Nebraskans to avoid the “Three Cs”: 1) crowded places, 2) close contacts, and 3) confined spaces.  He also reinforced basic health habits such as frequent hand washing and staying home when sick.

Dr. Gary Anthone, Director of Public Health for the Nebraska Department of Health and Human Services, joined the Governor for the briefing.  He talked about the State’s public service announcement (PSA) campaign to encourage Nebraskans to avoid the “Three Cs.”  An English-language PSA has been delivered to radio stations, and the State expects to release a Spanish version as well.  Additionally, the State is spreading the message through print and digital media.

Jason Jackson, the State’s Chief Human Resources Officer, announced an initiative to reduce the amount of close contacts within State of Nebraska workplaces.  He pledged that the State will continue to provide efficient and effective services to Nebraskans during the pandemic, even as the State adjusts its workplace arrangements.  The Governor also asked Nebraska businesses to look for ways to spread out their teammates and “De-densify” their workplaces to slow the spread of the coronavirus.

Nebraska Department of Education Commissioner Matthew Blomstedt reviewed the work happening at schools, and at school-sponsored extracurricular activities, to help people stay healthy.  When schools have to cancel social events out of a concern for the well-being of participants, Commissioner Blomstedt asked communities not to reschedule them in an alternate setting.  Holding the events informally, without rigorous health protocols, runs the risk of spreading the virus.

Additionally, Gov. Ricketts relayed findings from local public health departments that many cases of coronavirus have been traced to private gatherings.  As the holidays approach, he encouraged Nebraskans to avoid the “Three Cs” even when at home.  He also advised Nebraskans to get together with friends and family outdoors, as weather permits, to avoid congregating in confined spaces.