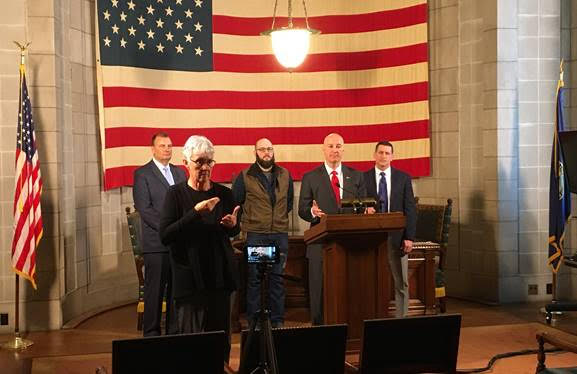 (KFOR NEWS  February 15, 2022)   Governor Pete Ricketts is calling on the Legislature to deliver tax relief to Nebraskans this session.

He noted that the State’s success controlling spending and growing Nebraska has put the Legislature in prime position to deliver tax relief.  During the Governor’s administration, the State has passed four two-year budgets limiting the annual average growth rate to 2.5%.  Meanwhile, State revenues have seen strong growth.  In October, the State’s Economic Forecasting Advisory Board increased the end-of-session July 2021 certified revenue forecast by over $900 million.  Since then, the State’s revenue receipts have continued to outpace projections.

Gov. Ricketts highlighted three tax proposals he has put forward to give back excess tax revenues to hardworking Nebraskans.

Adam Kavan, owner of Kavan Custom Construction in Lincoln, joined the Governor at today’s news conference.  He talked about the ways tax relief would benefit his family and his business as it deals with inflation and supply chain issues.  Scott Gubbels, Executive Director of Tax and Renewable Energy for Nelnet, spoke about the need to cut taxes to attract and retain businesses.  He shared personal experience of communicating with companies and talent that were reluctant to locate to Nebraska because of the State’s tax structure.

Nebraska Chamber of Commerce President Bryan Slone also spoke in support of tax relief.  He cited the trend of states lowering their income tax rates across the country, and he emphasized the need for the Unicameral to take action to keep Nebraska competitive.

Video of today’s event can be found by clicking here.