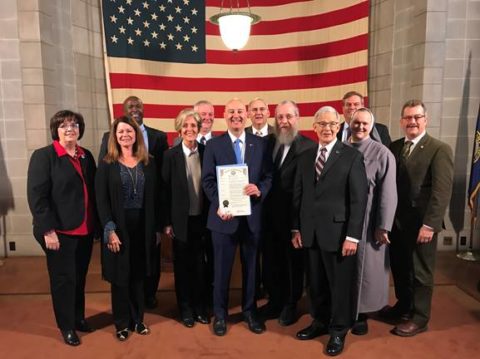 LINCOLN-(KFOR Jan. 13)-Governor Pete Ricketts signed a proclamation Monday declaring January 16, 2020 as “Religious Freedom Day” in Nebraska. Governor Ricketts was joined at the ceremony by State Senators, faith leaders, educators, and representatives from the Nebraska Family Alliance and Nebraska Catholic Conference. Religious Freedom Day is observed nationwide on January 16th, which is the anniversary of the 1786 passage of the Virginia Statute of Religious Freedom.

“Religious freedom is the first freedom listed in the First Amendment of the U.S. Constitution. That’s no accident,” said Gov. Ricketts. “Religious freedom is the cornerstone of a free society. The Founders of the U.S. recognized the importance of religion to the health of our Republic. They also knew that religion flourishes best when practiced without coercion. Nebraskans are blessed with religious liberty, and they exercise this freedom by standing up for the most vulnerable, serving the disadvantaged, and seeking the well-being of their neighbors.”

The First Amendment of the United States Constitution reads: “Congress shall make no law respecting an establishment of religion, or prohibiting the free exercise thereof; or abridging the freedom of speech, or of the press; or the right of the people peaceably to assemble, and to petition the government for a redress of grievances.” Article I-4 of the Nebraska Constitution recognizes that “All persons have a natural and indefeasible right to worship Almighty God according to the dictates of their own consciences.”