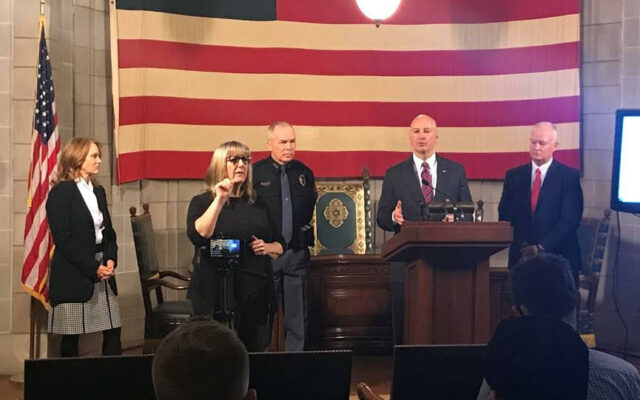 LINCOLN, NE (January 18, 2022) – This morning, Governor Pete Ricketts proclaimed January as “Human Trafficking Awareness Month” during a press conference at the State Capitol.  The Governor highlighted the State’s work to raise awareness of human trafficking, to investigate and prosecute trafficking crimes, and to support survivors.

Nebraska Attorney General (AG) Doug Peterson and Nebraska State Patrol Superintendent, Colonel John Bolduc, joined the Governor to discuss the State’s efforts to prevent human trafficking.  AG Peterson noted the successful prosecution of human trafficking crimes in Furnas County in 2021 as an example of the teamwork needed to stop human trafficking.  Colonel Bolduc cited the Furnas County case as a reminder that trafficking can occur in any part of the state—rural or urban.  The Furnas County investigation began with a tip from a citizen who reported suspicious activity.  Local law enforcement then partnered with the AG’s Office and the Nebraska State Patrol to conduct the investigation that ultimately led to a series of convictions.

Video of today’s event can be found by clicking here.

The Nebraska Human Trafficking Task Force, within the AG’s Office, released its 2021 update today.  The report is available by clicking here.