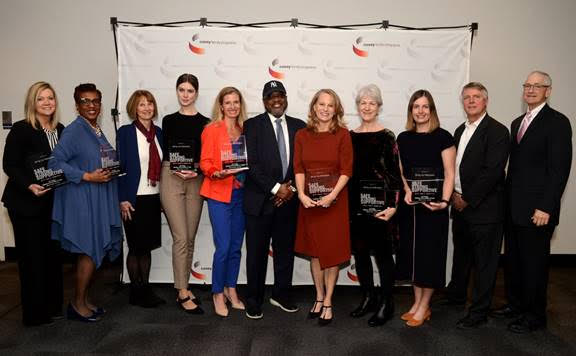 “Bring Up Nebraska’s award-winning work to improve child welfare exemplifies the spirit of partnership in our state,” said Gov. Ricketts. “I commend the First Lady, CEO Smith, and our community collaboratives for their united efforts to strengthen families across the Cornhusker State.  Their combined leadership is making a difference that will be felt for generations.”

Bring Up Nebraska is a community-led effort that takes a ground-up approach to prevention services—rather than the usual top-down method—by working with community collaboratives to identify and coordinate resources to enhance affordability and sustainability.  Bring Up Nebraska focuses on building a community’s capacity to solve its own problems and to hold itself accountable.

“This is a wonderful kudos for Nebraska.  We have chosen, as a State, to focus on supporting community-based prevention because we believe the communities that our families are tied to are most equipped to address gaps and supports for children and families,” said DHHS CEO Smith.  “Bring Up Nebraska has greatly benefited the Department’s work and child welfare team.  Having a local response team embedded in the community is not only a morale booster, but provides direct support for our staff.  It means they have access to resources and supports not only for the families they serve, but for themselves as well.”

In fiscal year (FY) 2017, there were 6,564 children in foster care in Nebraska.  In FY2018, that number declined to 5,962.  Today, 5,363 children are in foster care in Nebraska.  In other words, Nebraska has seen an 18% decrease in its foster care population in just over two years.  According to Casey’s most recent Key Outcomes Report, Nebraska had the fewest deaths related to maltreatment per 100,000 children in the country.  These outcomes are due to strong state/community prevention efforts like Bring Up Nebraska.

“When we begin to accept that child welfare is everyone’s responsibility, we can then work together to develop collaborative solutions,” said First Lady Susanne Shore.  “Local residents are most likely to be aware of families in need within their communities, and they’re also best positioned to provide these families with support and long-term stability.  Empirical data supports Bring Up Nebraska’s efforts and proves that, in general, families who remain together get stronger when they have access to the right resources.”

For more information on Bring Up Nebraska visit www.bringupnebraska.org and to learn more about Casey Family Programs visit www.casey.org.