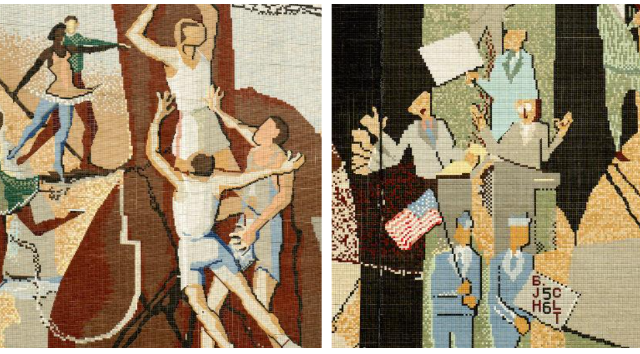 Lincoln, NE (March 15, 2022)  Pershing Auditorium is scheduled for demolition in the coming year, but a local group wants to save the large mural on the front of the building. Art supporter Liz Shea McCoy is heading an effort to raise the money.

“We had contractors give us bids to take down the mural, restore the mural, and then re-install the mural in another location.  The  bid for those three phases in three million dollars.”

One of the locations under consideration for its new home is the Lancaster Event Center.

“Right now we’re looking at the south area.  There’s a little train caboose located there right now.  It would definitely be outdoors.  It would be brought down closer to eye level.”

The height of the mural has been a subject of constant discussion in its 50 year life, and the committee’s discussion around placing it at ground level would give the public an opportunity to see the details.

“Having an outdoor installation, built in a plaza area, with benches and picnic tables and areas where teachers could bring their students to study those artistic details.”

As to a possible relocation to the Event Center, Amy Dickerson, Managing Director said  “We have been wanting to introduce more art on our grounds as we continue to improve the fairgrounds for both local and regional/national/international visitors.  We will continue to explore if the mural can find a home here, so Lincoln can still enjoy this unique 4-story tall representation of a variety of events that started at Pershing, and now continue here at the LEC, including many that feature animals.”

Shea-McCoy made it clear that saving the mural is more than simply saving a nice piece of art.  She said that thousands of Nebraskans have passed under the mural to attend dances, concerts, athletic events, trade shows, and the many other events held at pershing.

“People singing, dancing, theater, there’s acrobats.  All cultural activities are represented in that mural.  But it’s really the lines – the topographical lines of Nebraska – that are built into that design that make it Nebraska’s mural.

Tax Deductible monetary contributions to save Pershing’s Mural may be donated online to the Nebraska State Historical Society Foundation at https://www.nshsf.org/projects/pershing-mural/