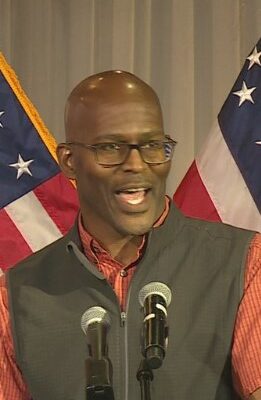 Parker, a Republican, played football for the Huskers beginning in 1982 and is also the founder of MyBridge, a Christian radio ministry.  Parker compares being Lincoln’s mayor to leading a nonprofit.  He said the mayor is primarily a leadership position, not a political one.  Parker thinks his leadership experience prepares him for mayor and sets him apart.

“If you are primarily looking for a politician for your next mayor,” said Parker. “I am not your guy, but if you want a leader, I believe, I am a pretty compelling choice.”

His campaign is described through the acronym “LINCOLN,” which stands for the following: leadership, integrity, Nebraska, collaboration, opportunity, law enforcement, and neighbors.

Parker’s campaign is seeking no significant funding at the start, but instead asking for the community to “vote early” by donating, Parker said.  He still needs 300 more signatures to make it on the ballot this spring.

If he makes it on the ballot he will be running against Republican State Senator, Suzanne Geist.  So far, current Lincoln Mayor Lierion Gaylor Baird has not announced a bid for reelection.