Former Doane President Passes Away At 94 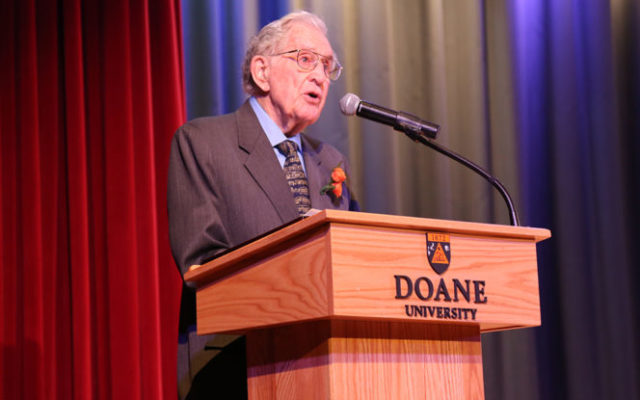 Heckman, who earned his Ph.D. in adult education from New York University, had only worked in higher education for two years prior to his arrival at Doane. He was the Vice President of Development at Yankton College in South Dakota for 22 months prior to being named Doane’s president. Most of his prior professional experience was with the YMCA and United Way. Heckman also served with the United States Navy during World War II in the Southwest Pacific.

Heckman began his presidency at Doane at 42 years old, leading the college in a difficult time in our country. He faced challenges right away, including having to replace the beloved Merrill Hall, which burned down on February 28, 1969.

Within Heckman’s first five years, Doane’s facilities expanded greatly. By the college’s centennial in 1972, Doane had added a Communications Center, Sheldon Hall, Fuhrer Field House, a new administration building (Padour Walker), and an addition to the Perry Campus Center. Fuhrer Field House, a 55,000 square-foot building for men’s and women’s athletics, was at the time, a premier facility of its kind in the Midwest.

Heckman was instrumental in reviving Doane’s financial instability, as he grew the college’s endowment from $3 million at his arrival to $20 million when he left, which at the time marked the largest per capita endowment in the state.

His interest in international affairs led to Doane hosting several national and international conferences, including the Mid-America World Symposium featuring the Saudi Arabian ambassador to the United States.

Under Heckman’s leadership, Doane became the first college to guarantee placement for its education graduates, built a retirement village for alumni and friends of the college, and perhaps most notably, established Doane Lincoln, a branch campus for non-traditional students.

Heckman will also be remembered for his lively personality. Always full of energy, he found pleasure in sharing his talents in areas beyond his role as a college president. Heckman was actively involved with the Lincoln Community Theater, something he was very passionate about. Whether it was playing occasional “Noon ball” with faculty and staff (pickup basketball games) or pickleball in his home driveway with faculty, staff, students, and community members, Heckman loved being around people.

“Phil was a great guy and personal friend,” said Dr. Fred Brown, who served as Doane President after Heckman from 1987-2005. “Phil had not only 20 years of great service but he created the infrastructure in people, buildings, and other matters that allowed us to continue to grow and enhance Doane.

“Aside from being a great president he was a fun guy. He liked to travel and loved to read. He was an actor, someone who was full of personality. He gave a lot of his life to Doane and the Crete and Lincoln communities and we are forever thankful for that.”

Phil is survived by his wife Barbara and their four children Peter, Susan, Matthew, and Rebecca. The Heckman family will be able to provide information on services to honor Phil at a later date.