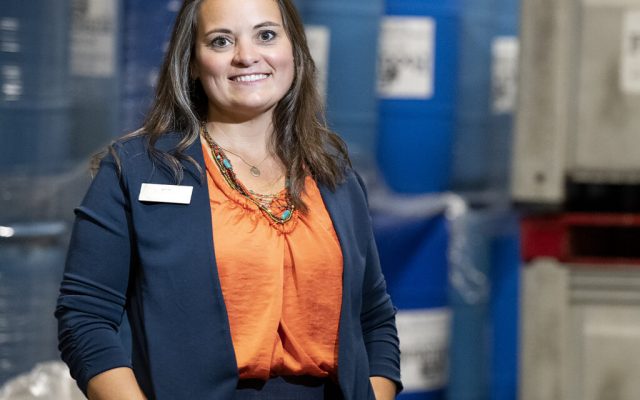 LINCOLN, Neb. – After more than six years with the organization, Michaella Kumke has been named the new President and CEO of the Food Bank of Lincoln, according to Steph Vanous, president of the Food Bank Board of Directors. On May 1, Kumke will succeed the current Executive Director Scott Young, who will retire on April 30. Kumke will be the fourth leader in the nonprofit’s 39-year history.
“Michaella has grown as a leader and a food banker in her tenure. She is the right person to lead the Food Bank into its next phase, allowing us to continue the work in feeding Lincoln and Southeast Nebraska for many years to come,” Vanous said. “From the Food Bank of Lincoln Board of Directors, congratulations, Michaella!”
Kumke currently serves as the organization’s community engagement director and staff co-leader of the Food Bank’s Raising Our Response to hunger capital campaign, a $10 million project for a new Food Bank facility. Since joining the Food Bank of Lincoln in 2015, Kumke has coordinated the organization’s communications, collaborated with fundraising initiatives, expanded food insecurity awareness and advocacy and was selected to join the Feeding America LevelUp! Emerging Leaders program, an exclusive group of 13 participants from across the 200-member network.
As a member of the Food Bank’s Leadership Team, Kumke helped facilitate and implement the organization’s response to the pandemic; a time when an organizational record of more than 13.5 million meals were connected to neighbors in the Food Bank’s 16-county service area.
As a devoted volunteer with more than 20 years of nonprofit experience, Kumke has dedicated her career to community service. She recently concluded her term as Habitat for Humanity of Lincoln’s Board Chair and was a 2019 finalist for the Lincoln Journal Star Inspire Excellence in Nonprofit award. Kumke serves on the Inspire Lincoln Advisory Committee, is a member Lincoln Public Schools Community Communications Advisory Committee and volunteers as a mentor to University of Nebraska-Lincoln (UNL) College of Journalism and Mass Communications students.
Kumke is assuming the leadership role at a time when an estimated 57,510 (12.2%) people in Southeast Nebraska, including 16,980 (15.7%) children, are experiencing food insecurity—and during the organization’s capital campaign dedicated to hunger solutions. With the goals of connecting neighbors to more meals, increasing access to healthy food and shortening food lines through education and community stability, Kumke is poised to lead the Food Bank during a time of significant growth.  “Michaella Kumke is a gifted leader who has the brains, heart and trustworthiness to lead the Food Bank of Lincoln to its next several levels,” Young said. “She will have the complete and important support of the entire Board, staff and volunteers who do the important work of alleviating hunger in Southeast Nebraska.”
Kumke holds a bachelor’s degree in advertising from the University of Nebraska-Lincoln and currently lives in Lincoln, Neb. with her spouse, Ariana Kennedy.