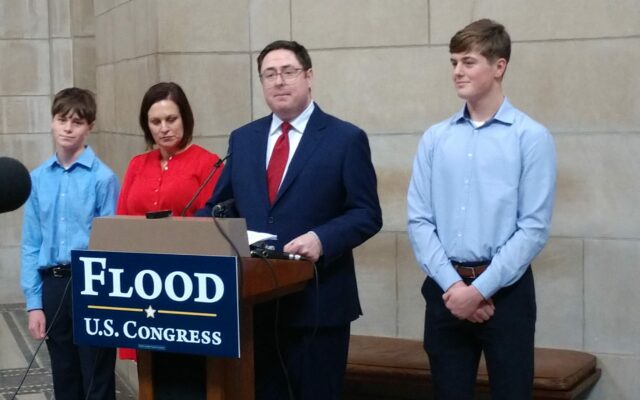 Flood held his victory party in his hometown of Norfolk.

“This is where I got everything started.  I’ve been doing neighborhood elections since 1983, and I would not want to be anywhere else but in Norfolk tonight.”

Flood trailed early as votes from Pansing Brooks’ hometown, Lincoln, were counted first.  During the 9 P.M. hour he drew closer, and took the lead shortly after 10 P.M.

He said Republicans are looking forward to controlling the House.

“I’m excited to say ‘We’re about to fire Nancy Pelosi, we’re going to end the Democrats’ one party rule in Washington’.”

Flood also had kind words for his opponent, Senator Patty Pansing Brooks, saying she was courageous and worked hard in her campaign.

“And at the end of the day, Senator Patty Pansing Brooks and I, we’re both, we’re all Nebraskans and we’re Americans, so I tip my hat to her and her family tonight.”