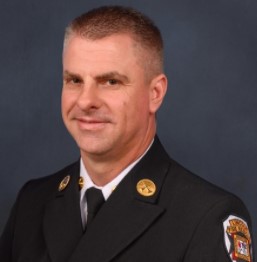 LINCOLN–(News Release Mar. 31)–Mayor Leirion Gaylor Baird on Wednesday announced that she is nominating current Acting Fire Chief David Engler to become the next Chief of Lincoln Fire and Rescue (LFR). Engler has served as the Acting Fire Chief since December 1, 2020, when former Chief Micheal Despain ended his service as the Acting Chief.

“Dave has demonstrated great leadership as the Acting Chief during the past four months,” said Mayor Gaylor Baird. “I appreciate his creative problem-solving ability and his willingness to tackle issues of long-term planning that will benefit the fire service and our community at large during his tenure. I am confident that Lincoln will continue to see outstanding results from Lincoln Fire and Rescue under his leadership.”

The Mayor highlighted the recent announcement that Engler was recently accepted into the 2021 Fire Service Executive Development Institute. “Dave’s acceptance into this premier career and leadership-development program is evidence of his demonstrated commitment to enhancing the fire and EMS service through his work at LFR,” she said.

“I’ve enjoyed my tenure as the Acting Fire Chief and I’m honored to have the opportunity to be nominated as Lincoln’s next Fire Chief, leading this outstanding group of public safety professionals,” Engler said. “I want to thank our Mayor, our elected officials, Lincoln’s firefighters, and our community stakeholders for trusting me with this great responsibility. I look forward to continuing to work collaboratively to provide our residents with the highest quality emergency response.”

Chief Engler began his career with LFR in 1996 as a Firefighter/Paramedic and was promoted to Fire Captain and then Battalion Chief in 2018. He earned a master’s degree from Creighton University, a bachelor’s degree from Doane University, and an associate of applied science from Southeast Community College. Chief Engler received his chief fire officer designation through the Center for Public Safety Excellence in 2019.

Engler’s nomination will be introduced to the City Council April 12, with a public hearing and vote April 19. With Council approval, Engler will start his duties as the Fire Chief on April 29.

LFR was nationally reaccredited in March 2019 and remains one of the longest accredited fire agencies in the nation. The agency has been awarded “Gold Plus” status by the American Heart Association “Mission Lifeline” program in 2017, 2018, and 2019. The Center for Public Safety Excellence presented LFR with the inaugural Randy R. Bruegman Agency Innovation award in 2019.

LFR has a staff of about 325 and provides emergency response to fires, vehicle crashes, and medical emergencies and emergency ambulance transportation; delivers fire safety education; promotes fire prevention to local residents and businesses; and is the host agency for Nebraska Task Force One, an Urban Search and Rescue Team serving as a component of FEMA’s national disaster response system.

More information on LFR is available at fire.lincoln.ne.gov.