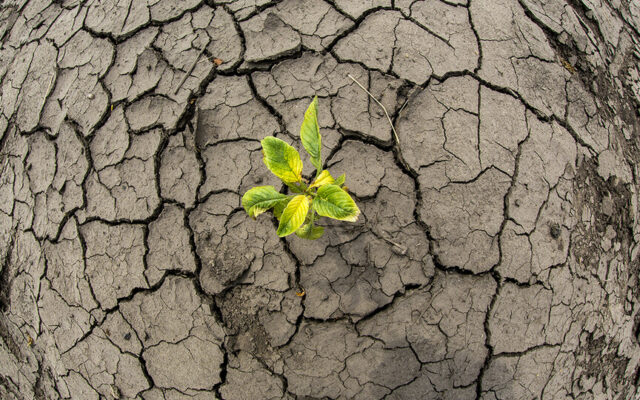 Lincoln, Nebraska (Dec. 13, 2022) — Concerns about severe drought are at their highest level since the Nebraska Rural Poll began questioning the state’s rural residents about weather events.

The 2022 poll asked a series of questions about severe weather, mirroring questions first asked in 2015 and again in 2020. Comparing responses across the three years shows that rural Nebraskans’ concerns about severe weather have fluctuated over time, depending on the weather experienced in a given year. Respondents expressed the most concern over extreme temperatures and more severe drought this year. Concerns about drought declined from 48% in 2015 to 21% in 2020 before increasing to 55% this year.

When asked about more frequent extreme rains or floods, the level of concern was highest in 2020. Just less than 30% of respondents were concerned about those conditions in 2020, compared to just less than 25% this year and 15% in 2015.

“Rural Nebraskans’ concerns about potential weather problems in their area seem to be influenced by their recent experiences,” said Becky Vogt, Rural Poll manager. “Concerns about more severe droughts are at their highest level, which is not surprising given that most of the state is currently experiencing drought conditions. And the concern about extreme rains or floods was highest in 2020, fresh after the flooding of 2019.”

The concern about severe drought and more extreme summer temperatures is especially true for Panhandle residents. More than three-quarters of those respondents are concerned about more extreme droughts, compared to about half of residents of the northeast, southeast and south-central regions.

“These trends in rural Nebraska are similar to what we’re seeing across the country,” said Heather Akin, assistant professor of strategic communication at the University of Nebraska–Lincoln. “Direct experiences with extreme weather tend to evoke more concern about climate change, but we’re also seeing more uncertainty in terms of how people think their communities will manage in the future.”

Four in 10 rural Nebraskans surveyed this year say too much attention is paid to global climate change. Sixty-nine percent of those working in agriculture agree with that statement, compared to less than a quarter of respondents with food service or personal care occupations.

“Farmers and others in the agricultural sector experience weather and climate events firsthand and are used to seeing and adapting to weather changes, which may be a factor here,” Akin said. “It’s also possible that people in agriculture see other issues, like the economy, as more urgent priorities than climate change right now.”

“While we saw a decrease in rural Nebraskans’ support for wind and solar, we can’t say whether it’s temporary or part of a long-term trend,” Akin said. “The majority of rural Nebraskans say we should invest about the same or more in these renewables.”

But some Nebraskans might be more wary of energy sources like wind turbines being in their backyard.

“Even when there is general support for investments in energy sources or the environment, local opposition is a common reaction at the beginning of the development process,” said Steve Schulz, associate professor of supply chain management at the University of Nebraska at Omaha. “Local acceptance tends to improve after a project has been completed.”

This year, 1,105 rural Nebraskans completed the Nebraska Rural Poll — an 18% response rate. In 2022, the poll asked respondents about their community, the economy and employment, their individual and family’s well-being, and views toward natural resources.

The poll, now in its 27th year, is sent annually to 7,000 households in rural communities across the state.

The Nebraska Rural Poll is the largest annual poll gauging rural Nebraskans’ perceptions about policy and quality of life. The margin of error is plus-or-minus 3%. Complete results are available at https://ruralpoll.unl.edu. The Department of Agricultural Economics at Nebraska conducts the poll with funding from Nebraska Extension.