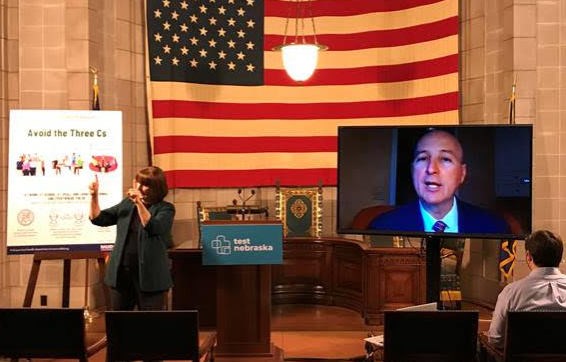 The Governor said empl0yees of Elkhorn Logan Valley and Douglas County health Departments have been threatened by people they called.

He said individuals in both cases are being prosecuted, adding that anyone else who issues such threats will be investigated and prosecuted also.

Ricketts also asked people to be respectful and understanding when they receive a contact tracing call.

“When your Local Public Health Department makes a determination that you have to quarantine or isolate, that’s done to keep you and the rest of the public healthy, so please leave a ‘little space for grace’, respect their decisions, respect what they’re doing.”

“As Nebraskans, we’re about being Nebraska nice to each other, we treat each other with dignity and respect, and we want people to remember that even in these trying times.”

The Governor also announced that a new chart on the State’s official Corona Virus Web Tracker will show the daily number of hospitalizations across the State, and will clearly mark the point at which additional restrictions on businesses and activities would kick in.  The chart will be found on the Covid 19 dashboard on the Department of Health and Human Services website.  The Governor said it’s expected to be available by the end of the week.

Tuesday’s total, 938 patients in Nebraska’s hospitals, is the highest since the beginning of the pandemic.  Ricketts plans additional restrictions if the number reaches 25% of the State’s hospital bed capacity, a figure that is currently around 1,150.  He said the chart will show Nebraskans how close the State is to the figure each day.