Covid-19 Takes Another Life In Lancaster County, As First Anniversary Of Covid Pandemic Is Noted 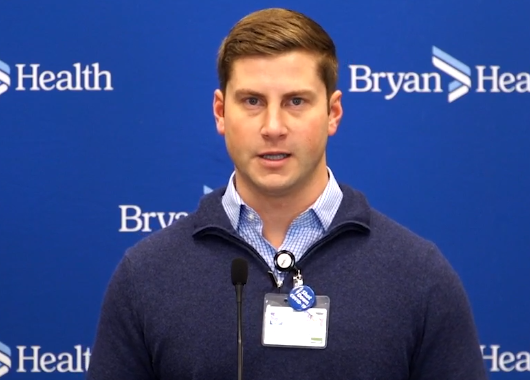 Lincoln, NE (March 11, 2021) — Lancaster County lost another resident to the corona virus today. She was a woman in her 80’s who died at home. That pushes the local pandemic death toll to 223. The health Department also confirmed 44 new cases today.

In his 129th Media Briefing since the Pandemic began, Bryan Vice-President of Advancement Bob Ravenscroft noted that the Hospital has had days in which 160 to 170 Covid-19 patients were under care.  Today, he said, 9 patients with active Covid infections are currently patients there.

Even though virus case numbers are dropping, doctors are still learning more about how it works, according to Bryan Pulmonary Doctor Matt Maslonka.  He said today that one of the recent findings confirmed is that additional symptoms continue appearing in some patients even after they’re no longer infected with the disease.  The first is fatigue:

“It is referred to as an ‘overwhelming fatigue’.  One person described it to me that it was like he ran a mile all day long, without stopping.  Other symptoms of post covid syndrome, or “long hauling” as he called it, include shortness of breath, heart pounding, muscle aches, memory loss, and difficulty concentrating. Some even reported rash and hair loss.

Dr. Maslonka said there is also some exciting news around testing.  Although not widely available yet, T-Cell Testing is believed to be much more accurate than the antibody testing that has been done until this point.

“It can further and more accurately assess who has been affected, and help distinguish those who are having symptoms related to post-covid syndrome that had tested negative in an antibody test.”

Ravenscroft said it is unlikely that Bryan will ever offer T-Cell testing in house.  Rather, he said, Bryan will send samples for those tests to outside labs for evaluation.

Ravenscroft thanked all the health care workers and others who have worked together to fight the Pandemic.  “Our health care infrastructure has been tested to its limit, and on some days beyond it” he said.

Dr. Fauci Reflects On The Pandemic’s One-Year Mark And How To Get Back To ‘Normality’