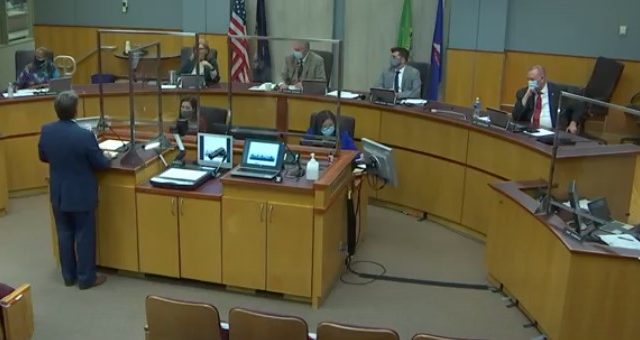 Lincoln, NE (August 16, 2021)  During the Pandemic, Lincoln Mayor Leirion Gaylor Baird issued an executive order that was intended to help bars and restaurants make up some of the revenue they were losing.  During a time of fewer tables and more social distancing, her order allowed establishments to place additional tables outside, on City property such as sidewalks.

Monday, the City Council made that order permanent.  Councilman James Michael Bowers was the principal sponsor of the measure, which removes the rule which says that most of an establishment’s sales must be food before it is be eligible to establish a sidewalk cafe.

“Beyond Covid, this is a small step that Lincoln can take toward becoming a vibrant city for young adults” Bowers said.  “Does it really matter:  Yes, because to attract and retain younger people that Lincoln says it wants, it has to be more than a place to live.  It has to be fun.”

Bowers’ proposal was approved on a unanimous vote.

The City is approaching the end of a one year trial period in which rental scooters are available throughout the downtown area.  Transportation and Utilities Director Liz Elliott is proposing an extension of the trial through at least the end of December.  She believes that Covid has held down some of the participation important to evaluating the scooters and whether they should become a permanent part of downtown.

“By extending it to the end of the calendar year this does give us the opportunity to have the Fall semester, and to see how the program works with the University back in session and the students back on campus.”

Elliott explained that the Pandemic severely cut the number of students available to ride and test the scooters in the past school year.

The proposal under consideration would also add Canopy Street and Pinnacle Arena Drive to the area where sidewalk riding is prohibited.

Elliott was also asked about reports that some young people renting the scooters were using them for  unsafe recreation inside parking garages, where the ramps allow greater speed and sharper turns.   She said that geo-fencing (excluding the scooters electronically from the garage addresses) is being looked at as a way to avoid unsafe operation of the scooters.