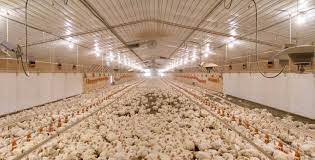 The letter responds to a Mercy For Animals investigation revealing disturbing footage at a Nebraska farm that supplies Lincoln Premium Poultry, the company Costco set up and controls to supply itself with many of the 100 million rotisserie chickens it sells each year.  As detailed recently in the New York Times, the footage exposes chickens bred to grow so large so fast they cannot support their weight and countless birds suffering from open wounds and broken bones.

The cruel practices captured in the footage stand in stark contrast to Costco’s claim that “animal welfare is a critical component that has been integrated into all aspects of the chicken supply chain, from the hatchery to the grower barns to the processing facility.”

The following is an excerpt from Representatives Stevens and Escobar’s letter:

Although Costco profits off its marketed claims that “animal welfare is a critical component that has been integrated into all aspects” of its vertically integrated chicken supply chain, this structure results in systemic inhumane treatment of these chickens. More than 200 food companies in North America have already adopted humane guidelines, such as those outlined in the Better Chicken Commitment, that address the worst suffering for chickens. Costco has not. For this reason, Costco’s claim that it is “committed to maintaining the highest standards of animal welfare” is deceptive to stakeholders.

“We commend Representative Escobar and Representative Stevens for speaking up for the millions of chickens that Costco suppliers raise and slaughter every year,” said Leah Garcés, president of Mercy For Animals. “Costco has built a system of cruelty, hidden from consumers, that prioritizes providing cheap chicken over the animal welfare standards that Costco claims to meet and the company’s members expect. Costco controls millions of animals’ lives and can take immediate action by adopting the Better Chicken Commitment, a set of higher welfare standards already supported by hundreds of restaurants, retailers, and food companies. Such a policy would ban cruel practices uncovered in the investigation referenced by Representatives Stevens and Escobar in their letter.”

Since New York Times columnist Nick Kristof broke the news of this investigation, tens of thousands of people have signed a petition asking Costco to ban some of the worst cruelty in its supply chain.