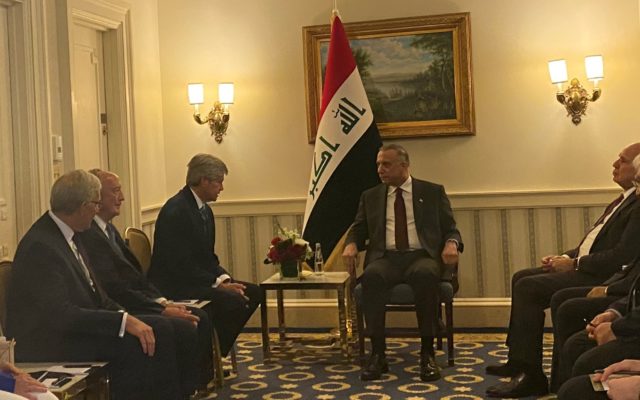 WASHINGTON, DC (July 29, 2021) – Congressman Jeff Fortenberry and Nebraska Secretary of State Bob Evnen met with Iraqi Prime Minister Mustafa Al-Kadhimi on a range of issues, including the future of U.S. military engagement in Iraq, protection of religious minorities in Northern Iraq, and integration of religious minorities into the Iraq security forces.  Fortenberry’s hometown of Lincoln, Nebraska is home to the largest community of Yazidis in America.

“America has given so much, suffered so much in Iraq, it can be hard to grasp why ongoing engagement is necessary.  In our meeting, I commended Iraqi Prime Minister Al-Kadhimi for his leadership in positioning Iraq to reemerge as part of the community of responsible nations,” Fortenberry said.

“In the wake of the ISIS-led genocide, we discussed rebuilding Sinjar and Nineveh and the status of several hundred thousand Yazidis in Northern Iraq still trapped in tent structures unable to safely return home.  I found the Prime Minister to be open to resolving these and other issues, as his country looks to manage its own affairs and restore the rich tapestry of religious and ethnic pluralism that has long been Iraq’s hallmark,” Fortenberry added.