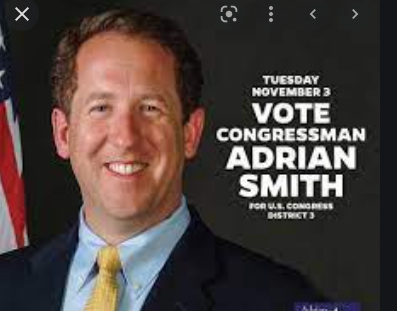 SCOTTSBLUFF, NE (January 19, 2022) – Congressman Adrian Smith filed for re-election today to represent Nebraska’s Third District in the U.S. House of Representatives. Smith said his mission in Congress will be to fight “the reckless agenda of Joe Biden and Nancy Pelosi while working to restore a pro-growth economy that boosts Nebraska agriculture, families, and small businesses.”

“The listless presidency of Joe Biden and his elite liberal allies on Capitol Hill led by Chuck Schumer and Nancy Pelosi threatens to destabilize our country and our economy,“ Smith said. “From the bungled withdrawal from Afghanistan to capitulation to China and Russia, the Biden-Harris administration has weakened America’s standing on the world stage. At home Democrats in the White House and in Congress support an open Southern border, taxpayer funded abortion, restrictions on law-abiding gun owners, and runaway federal spending.”

“There is a sense of urgency to restore common-sense and fiscal responsibility in Washington and that’s why I’m running for re-election,” said Smith. “I will fight the liberal special interests while rolling up my sleeves and working on the issues important to Nebraska’s future. I have been a leader on tax reform and tax relief, on the front lines of trade issues vital to Nebraska’s economy, in the trenches working for our farmers and ranchers on regulatory relief and market access, and a strong advocate for workforce re-entry programs to address the pressing need to fill job openings.”

“I humbly ask Nebraskans for their support and vote, and look forward to continuing to fight for the Third District.”

Smith currently serves on the House Ways and Means Committee, and is the Ranking Member of the Subcommittee on Trade. The Third District covers 80 of Nebraska’s 93 counties. Congressman Smith and his wife Andrea, along with their two children, reside in Gering.