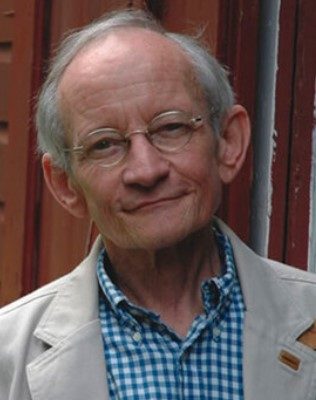 Lincoln, Nebraska, June 11, 2021 — Ted Kooser has touched countless lives through his poetry. His career has included two terms as U.S. Poet Laureate and a Pulitzer Prize. A presidential professor emeritus at the University of Nebraska–Lincoln, Kooser extended his reach by not only writing great poetry, but teaching it.

Kooser is beloved for his teaching style. While many creative writing workshops consist of about eight students, he gave students one-on-one critiques in his poetry tutorials.

The tutorials became the foundation for the careers of many contributors to, and several pieces included in, a recently published book, “More in Time.”

The book celebrates Kooser’s career as a poet and educator. It is a collection of 68 personal reflections, essays, poems and other creative works inspired by and dedicated to Kooser.

“This collection shines a light on the many ways the Midwestern poet has affected others as a teacher, mentor, colleague and friend, as well as a fellow writer and observer of the world,” the publisher’s description reads. “The creative responses included in this volume are reflective of the impact Kooser has had in his connections to other writers, while also revealing glimpses of his distinct way of seeing.”

The book’s pieces show deep admiration for Kooser. Some recollect his generosity, while others detail the emotions around and lessons learned in his poetry tutorials. Some writers told the stories behind quotes they hadn’t forgotten such as “I quit drinking when it turned into a part-time job” and “A poem has to be something more than a good story.” Some titles also exude praise, including “Ted Kooser is My President,” “On Ted Kooser: Poet of Clarity and Sight” and “Ready to Hold My Hand: Ted Kooser as Mentor and Friend at the St. Elizabeth Mammography Center.”

The book was conceived by Husker faculty members Marco Abel, chair and professor of English, and Timothy Schaffert, director of creative writing and professor of English. Prompted by Kooser’s retirement, it was inspired by the concept of a Festschrift, the German tradition in which a publication honors a respected academic by compiling contributions from former students and colleagues.

Abel and Schaffert pitched the idea to the University of Nebraska Press, and it quickly gained approval. They invited Jessica Poli, an English graduate teaching assistant and doctoral student at Nebraska, to be the book’s third editor and sent an email to Kooser’s former students, colleagues, friends and admirers.

Within a week, more than 60 potential contributors had eagerly responded.

“I have never experienced anything like it in terms of just getting this kind of enthusiastic response,” Abel said.

Once the editors received their responses, they decided the book’s structure. The editors knew they wanted to give the last word to Kwame Dawes, editor of the literary magazine Prairie Schooner. They were also sure they wanted a specific poem by James Crews in the middle.

“More in Time: A Letter to Ted” pays homage to the phrase that serves as the book’s title.

Kooser occasionally uses the phrase at the end of his emails.

The book editors were so taken by the phrase that they chose it for the book title.

“It’s a promise,” Abel said. “It’s a welcoming, it’s a gesture of friendship, it’s a very human way of ending an email.”

The book was a surprise to Kooser. The editors told him about the collection only after it had been completed. Kooser has read the book a couple of times and said it is a great honor.

“It shows me that I did a pretty good job as a teacher and mentor,” he said.

“More in Time” was published in March and was introduced by University of Nebraska President Ted Carter at a Zoom launch event on April 7.