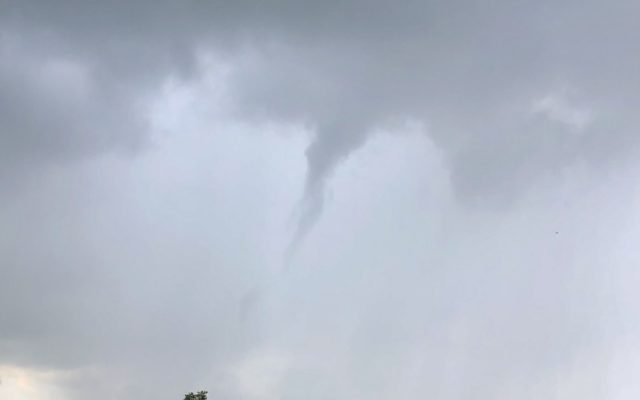 GRETNA–(KFOR June 30)–Commuters heading to Omaha on Tuesday evening may have been caught off-guard by what turned out to be, what weather forecasters call, cold-air funnels dipping down out of the clouds.

Forecasters say funnel clouds form during strong rainstorms when the air aloft is unusually cold. These funnels are usually harmless, only last a few minutes and rarely touch down on the ground. But such funnels can rarely come down to the ground and cause some damage.

The National Weather Service in Valley issued an advisory that such funnels could form Tuesday evening.

There were no reports of any damage from a funnel that reached about halfway down to the ground briefly in an area of Sarpy County from about 168th Street to 180th Street, just south of the Millard area of southwest Omaha.  The photo above is a still shot taken by Rob Kelley that’s looking north from the Walmart parking lot off of Interstate 80 and Highway 370 a few miles east of Gretna.

There were no official reports of cold-air funnels in the Lincoln area on Tuesday afternoon and evening.  If you have photos to submit for verification, contact the National Weather Service office in Valley.

Wondering why you might be seeing a funnel cloud today. Here's a quick explanation! pic.twitter.com/86wWFYZXqc