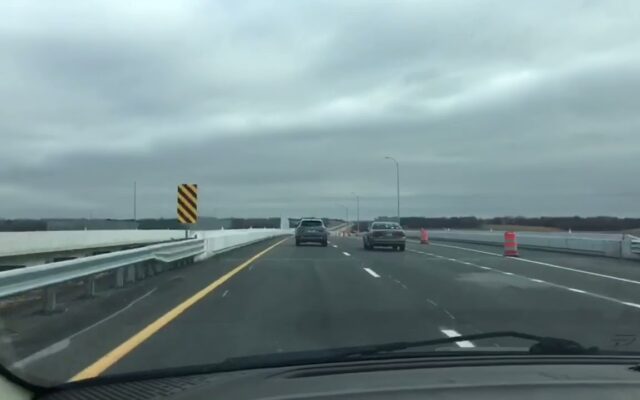 LINCOLN–(KFOR Dec. 14)–What has been talked about for more than six decades finally became reality on Wednesday morning, when Lincoln and Nebraska leaders gathered to open up the South Beltway.

The 11-mile freeway will be the new stretch of Nebraska Highway 2, while the old route through south Lincoln has been renamed Nebraska Parkway.  The South Beltway goes from interchanges at Highway 77 and Saltillo Road on the west end to 120th and Nebraska Parkway to the east.  Total cost of the project is around $352-million.

Hawkins Construction Company and its more than 300 employees and contractors managed to get the beltway project done in just under three years.  It was slated to be open by May 2023 and Wednesday marked that the beltway was done five months ahead of schedule.

The concept of a beltway for the Lincoln area goes back as far as the early 1960s.  Chris Hawkins, President and CEO of Hawkins Construction, said the project marks as a milestone for his company and the city of Lincoln.

“Year in the making, this project required an extraordinary level of creativity and downright tenacity.  Our gratitude goes to the hundreds of people who committed their skills and effort to make this one of the nation’s most successful ‘mega-projects,” Hawkins said.

Governor Pete Ricketts spoke at Wednesday’s freeway opening and called it a “big, big deal,” especially when it comes to safety.

“This is going to be important for improving safety and efficiency of transportation,” Ricketts said.

Mayor Leirion Gaylor Baird added, “This huge effort will deliver meaningful gifts to our residents of Lincoln and Lancaster County and all across our state, in the form of increased safety, mobility and prosperity.”

The overall project still needs to be completed in some spots, including interchanges at 27th Street with Jamaica Avenue and Bennet Road.  Work also needs to be finished at the interchange with 82nd and 84th streets.

Projections show within two years, the South Beltway will carry more than 13,000 vehicles daily.  Considered to be the preferred route for semi-trailer truck traffic, the beltway is expected to reduce truck traffic through Lincoln by 80% compared to current traffic patterns.