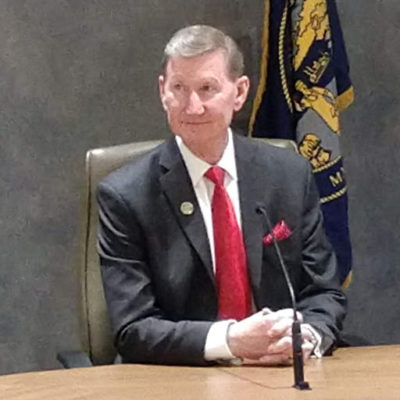 Carter was joined by Board of Regents Vice Chairman Bob Phares of North Platte and University of Nebraska-Lincoln Student Body President Roni Miller in testifying in support of LB588, a proposal from Appropriations Committee Chairman John Stinner to continue the state-university partnership on deferred maintenance through 2061-62.

Praising Stinner’s leadership in sponsoring LB588, Carter called the proposal a win for all Nebraskans, including students, faculty and staff who deserve world-class facilities in which to learn, teach and do research.

“In short, this plan changes the trajectory on how we address deferred maintenance at the University of Nebraska,” Carter said.

“Any way you look at it, this plan makes good business sense. If we act now, we have an opportunity to get the most purchasing power out of our dollars and save future Nebraska taxpayers valuable money. On the other hand, if we do not act, our $800 million challenge will simply get more expensive every year.

The state currently provides $11 million per year for university maintenance needs, matched dollar-for-dollar by NU. LB588 would extend that joint investment through 2061-62, and add $2.5 million in new annual state funds to also be matched by the university.

The bill also requires NU to set aside 2 percent of the cost of state-funded renewal projects each year to create a long-term “sustainability fund” that would be used for future deferred maintenance needs. That provision, requiring the university to set aside its own dollars, will help ensure NU is disciplined and strategic in its capital spending, Carter said.

Finally, the bill requires the university to submit a report every two years to the Legislature outlining completed capital projects and future planned construction, as well as reports every five years outlining NU’s long-term capital plan. Carter and Phares commended those elements of the legislation as “rigorous accountability guardrails for our stewardship of Nebraska resources.”

Carter and Phares agreed that LB588 represents a savings of $1.5 billion for Nebraska taxpayers over the 40-year duration of the bill, when compared to the university’s current practice of issuing bonds approximately every 10 years for capital projects.

“I’m a financial planner and I evaluate risk and rewards on a daily basis. I’m interested in making every penny count,” said Phares, the immediate past chairman of the Board’s Business and Finance Committee. “LB588 makes the pennies count.

“Moreover, the financial risk of doing nothing is simply too great. As I’m telling my clients every day, we may never see interest rates this low again. The time to act is now.”

Phares, a regent since 2006, noted that the Board has wrestled with the challenge of deferred maintenance for years. The Board and university have made good progress thanks to the existing partnership with the state – the recently opened Discovery Hall at the University of Nebraska at Kearney and major upgrades to the College of Engineering currently underway at UNL are recent success stories – but, Phares said, the needs have simply outpaced the available dollars.

More than one-third of NU’s buildings are 50 years or older; another 20 percent are at least 25 years old. Many require significant upgrades to make them suited for 21st-century teaching and learning – critical to the university’s ability to recruit and retain top talent.

Miller, speaking on behalf of the NU system’s 52,000 students, said students share a desire for safe, modern, high-quality facilities where they can learn and study.

“I can tell you that the overall student experience, especially the actual look and feel of buildings on campus, is a major factor when young people decide where to go to college,” Miller told the committee. “I know faculty have the same considerations in deciding where to work. To put it simply, our facilities matter.”

Also today, Carter testified in support of the Appropriations Committee’s preliminary budget recommendation for NU for the 2021-23 biennium. The university is seeking 2 percent increases in state funding each of the next two years. The funds would go toward salary increases for faculty and staff; other expenses incurred by the university will be funded through a $43 million reallocation process now underway across the system.

The Appropriations Committee has initially recommended fully funding NU’s request. The committee is also supporting continued funding for the Nebraska Career Scholarships, a new state program providing scholarships for students in high-need areas like engineering, math, IT and healthcare. The program launched this spring and NU campuses have already awarded 28 scholarships, Carter reported.

Speaking on behalf of the NU student body, University of Nebraska at Omaha Student Body President Jabin Moore thanked the committee for supporting NU’s funding request, noting the investment will clear the way for a planned two-year, across-the-board tuition freeze.

“I can’t tell you how much this means to students, especially during these difficult times,” said Moore, a first-generation student. “The tuition freeze means Nebraska will be able to recruit and retain even more talented students, at a time when uncertainties created by the pandemic have caused enrollments to decline at other institutions.”

After the conclusion of its hearings, the Appropriations Committee will issue final budget recommendations for debate by the full Legislature. The budget package then heads to Gov. Pete Ricketts for consideration.