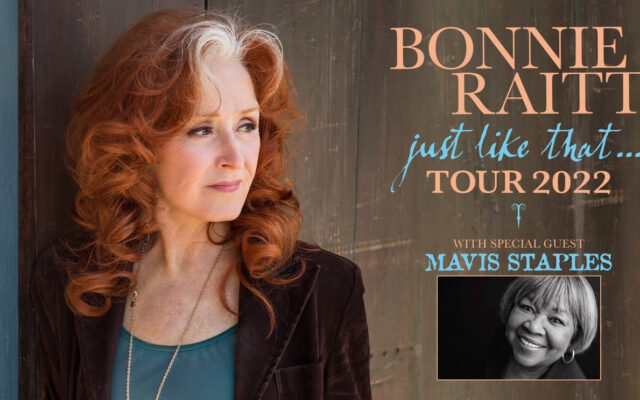 Lincoln, NE (February 15, 2022)  (Lincoln, NE) – Bonnie Raitt will return to the live stage with Just Like That… a national tour in 2022 launching in April and running through November which includes music from her forthcoming, long-awaited studio album, ‘Just Like That…’ The tour will include a stop in Lincoln for a concert at Pinewood Bowl on Tuesday, August 2.

Raitt said, “To celebrate finally being able to play live concerts again by reuniting with my dear friend and inspiration, the great Mavis Staples, is a thrill words can’t really express. Mavis and her band are at the top of their game, and I know they feel the same about us. Hope you can experience the magic when we come through on tour this summer!”

Tickets will go on sale February 18th via Ticketmaster.com.

Continuing a long-standing tradition in conjunction with The Guacamole Fund and Raitt’s Green Highway campaign, one dollar from every ticket purchased will be donated to grassroots local, regional, and national organizations whose work focuses on safe and sustainable energy, social justice, and human rights, environmental protection, and blues/music education.