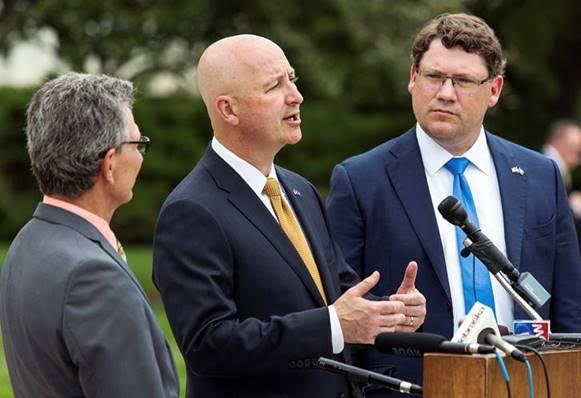 Ricketts unveiled the plan during his annual State of the State address to lawmakers that lavished praise on the citizens and state officials who responded to the disaster. Hailing it “Nebraska’s finest hour,” Ricketts said the flood put undue pressure on local governments.

“When we were faced with the most widespread and costliest natural disaster in state history, Nebraskans responded with heroic grit, determination, resilience and generosity,” Ricketts said.

The $9.2 million in local assistance would go to Boyd, Custer, Dodge, Garfield, Greeley, Keya Paha, Knox, Nance, Nemaha, Platte, Valley and York counties to help pay for part of each county’s share. In an embargoed, pre-speech press briefing Tuesday, Ricketts said none of the counties were told that they could be receiving additional assistance.

The federal government is expected to pay 75% of the repair costs for eligible, flood-damaged public property, while the state and local governments each take 12.5%.

The announcement was a huge relief for officials in Greeley County in rural central Nebraska, where the North Loup River and numerous creeks spilled out of their banks.

The flooding caused so much road and bridge damage that county officials drained their general fund and raised property taxes by 43%, said county board member Michael Goldfish. Even then, Goldfish said they still had to take out a bank loan for the first time in his 21-year tenure in public office.

Under the governor’s proposal, the county would get an extra $2.2 million in state aid to help cover its share of the repair costs.

“That’s welcome news,” Goldfish said. “It would make a huge difference for us. We’re pretty conservative with our spending, but we’re in farm country and the economy’s not good right now.”

Ricketts also proposed an additional $3 million to pad the governor’s emergency fund, a state account that would be used for any future disasters.

In his praise for citizens and state officials, he pointed to the Nebraska National Guard members who rescued 112 people during the flooding and Nebraska State Patrol deputies who rescued more than 160 following the blizzards and floods in March. The Nebraska Department of Transportation likewise helped repair and reopen 3,300 miles (5,311 kilometers) of state highway and 27 flood-damaged bridges, and the Nebraska Emergency Management Agency coordinated the state’s response, he said.

Ricketts also promised to work with state lawmakers on a property tax package, pledging $500 million in state money to help lower those taxes for farmers, ranchers, homeowners and businesses.

The Legislature’s Revenue Committee has proposed a bill that seeks to lower property taxes by reducing the percentage of land value that schools districts are allowed to tax. Those schools would receive a boost in state aid, and smaller, rural schools would see larger increases than the more populated Omaha- and Lincoln-area schools.

Ricketts said he would continue oppose any bill that raises taxes or raids the state’s existing property tax credit fund. He said he also wanted to encourage local governments to restrain their spending as the state has done.

Ricketts called for $3.8 million to repair a damaged tunnel at the Fort Laramie Canal that collapsed in July, cutting off water to more than 100,000 acres (40,469 hectares) of farmland in Wyoming and Nebraska. Officials responded with a temporary fix but still need to make permanent repairs. And he recommended a $16 million investment in a new Nebraska Career Scholarship program to help pay for the education of students in high-demand fields.