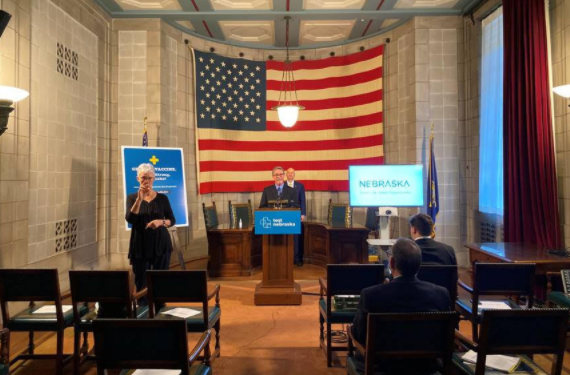 LINCOLN, NE (March 8, 2021) – Today, Governor Pete Ricketts announced the results of an E30 demonstration project conducted by the University of Nebraska-Lincoln (UNL) with support from the State’s Department of Administrative Services (DAS).  The ground-breaking research concluded that E30, gasoline blended with 30% ethanol, is safe for long-term use in non flex fuel vehicles (FFVs).  A summary of the research is available by clicking here.

“The research partnership between the State and the University clearly demonstrates that E30 is a safe and reliable fuel for vehicles,” said Governor Ricketts.  “Ethanol saves drivers money at the pump, is good for air quality, and creates opportunities for our farm families.  This study will be a great aid as we advocate for growing the volume of E30 in our nation’s fuel supply.  In turn, raising demand for E30 biofuel will benefit Nebraska’s corn growers who supply 35% of their crop to our state’s ethanol industry.”

A team at the UNL Engineering Department—led by Dr. Rajib Saha, Assistant Professor of Chemical and Bimolecular Engineering—completed a summary of the E30 demonstration and reported the safety of using the fuel in non-FFVs.  The team reached its conclusion after a yearlong demonstration, permitted by the U.S. Environmental Protection Agency (EPA), compared various data points among a fleet of state-owned, non-FFVs.  The full results of the demonstration will be released after being peer reviewed.

“There has been inconsistent messaging that using higher blends of ethanol reduces the fuel efficiency or wears down parts,” said Adil Alsiyabi, the primary UNL researcher of the E30 demonstration.  “But what the results show is that none of that is true.  By going through rigorous testing, we’ve proven that higher ethanol blends do not decrease efficiency or compromise engine performance.  Our goal was to find out if the vehicles on the road today can use ethanol blends up to E30 with no loss in fuel mileage and no mechanical issues.”

The demonstration captured data using On-Board Diagnostics (OBD) devices on approximately 50 vehicles through both warm and cold seasons.  When the engine was started, the device captured millions of data points, giving UNL researchers an opportunity to monitor fuel efficiency, vehicle performance, emissions control systems, and many more systems.  Additionally, drivers kept a log each time they filled up and provided their experience in regards to maintenance and efficiency.

“We were not surprised by the results,” said Roger Berry, administrator for the Nebraska Ethanol Board.  “I am encouraged that we now have hard facts that show E30 can safely be used in vehicles other than flex fuels.  Our next step will be to demonstrate this to the EPA and auto manufacturers and to change their recommendations.  I personally have been a long-time user of higher ethanol blends in my conventional vehicles and have had no issues.  Ethanol is a widely studied fuel.  More people will start to see ethanol’s benefits as we continue to provide the facts through projects like this.”

Under U.S. EPA current guidelines, only FFVs can use blends higher than E15.  This demonstration resulted in data strongly indicating that today’s conventional vehicles can safely and economically use E30.  Since ethanol is made locally from Nebraska corn, it is often cheaper than other gasoline options.  Ethanol also replaces toxic chemicals found in gasoline with renewable octane—making it a healthier, cleaner fuel.

Making E30 more widely available will also help the ethanol industry stay competitive among transportation innovations as the country works to reduce its carbon footprint, according to State officials.  They pointed out that traffic is one of the highest contributors to carbon pollution which has been linked to cancer, heart disease, and increased respiratory issues.  By using fuels blended with ethanol, drivers reduce greenhouse gases by 46 percent.  According to Growth Energy, a national ethanol organization, if the U.S. transitioned from E10 to E15, greenhouse gas emissions (GHG) would be lowered by 17.62 million tons per year, which is the equivalent of removing approximately 3.85 million vehicles from the road.  Increasing the amount of ethanol in the blend will continue to decrease harmful emissions.

“Using E30 is just as effective in eliminating carbon emissions as electric vehicles (EVs) when you compare ‘well to wheel’ emissions of the two types of vehicles,” said Jan tenBensel, chairmen of the Nebraska Ethanol Board.  “That puts ethanol in a good position to help achieve our climate goals as a nation.”

“DAS is proud to have been a part of this successful E-30 pilot study,”  said DAS Director Jason Jackson.  “Our team with Transportation Services Bureau has done a great job working along side state and federal partners to deliver accurate and reliable data for the study.”

Berry said the Nebraska Ethanol Board plans to work with industry partners and the EPA to continue E30 demonstrations, which have gained interest from other state governors.