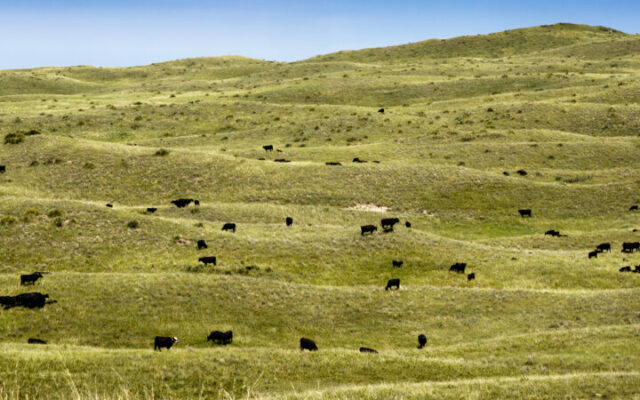 (KFOR NEWS  March 1, 2022)   To speak with the University of Nebraska–Lincoln’s Dirac Twidwell is to hear the sentiment emerge as a sort of mantra. The reasons preceding the statement, and behind the sentiment, are legion. Protecting signature species from extinction. Maintaining the quality of air and aquifers. Mitigating wildfires and floods. Preserving cultures and livelihoods that echo across generations.

The associate professor of agronomy and horticulture has spent years researching and combating the decline of grasslands, especially the one just a few hundred miles to his northwest: the Nebraska Sandhills. That distance, as relatively short as it is, represents the gulf between what Nebraska is and what it was even a few hundred years ago.

What it was, what the Sandhills remain, is what an ecologist would call a temperate grassland: a mostly treeless, grass- and wildflower-covered region that grounds the surrounding ecology and culture. Or, as Twidwell would describe it, one of the last “true prairies.”

Researchers have known for a while that many grasslands, whether temperate or tropical or desert, are shrinking in size or outright disappearing from the planet. Twidwell and colleague Rheinhardt Scholtz recently sought not just to clarify the global scope of grassland decline, but to identify the grassland regions that remain whole enough to stand a reasonable chance of being preserved well into the future.

In a new study, the researchers found that, of all the temperate grasslands on the planet, the Nebraska Sandhills are the most intact. In fact, the duo’s study revealed that the Sandhills are among just seven large-scale grasslands of any type that remain mostly intact. Another resides in the Wyoming Basin, with two others in Asia and one each in Africa, South America and Australia.

But even among that select company, the Sandhills stand apart in two regards. For one, they reside next to the third-most converted grassland region in the world — one that includes central and eastern Nebraska, which has been extensively cultivated for agricultural production over the past 150 years. Despite that, Twidwell said, the Sandhills are also the only major intact grassland currently without a formal conservation strategy.

“I would say that the residents of Nebraska and surrounding states know more about the conservation value and losses in tropical rainforests than in grasslands,” Twidwell said. “But the few relatively intact grassland regions provide the greatest potential for global grassland conservation in this century.”

To better understand the global status of grasslands, Twidwell and Scholtz turned to satellites operated by NASA and the European Space Agency. Combined, those satellites allowed the researchers to calculate two metrics that tend to say a lot about the resilience and long-term prospects of a grassland region. One is intactness, which Scholtz explained by pulling up a three-by-three grid of pixels resembling the connected squares of a chessboard. To evaluate intactness, the researchers directed a program to pick a pixel, then analyze it and the eight pixels that bordered it. If any of those pixels were not predominated by grassland, the nine-pixel area was not considered intact.

By running that analysis on every pixel in a grassland region, the duo was able to calculate the percentage of the given region that remained intact. Of the 70 grassland regions analyzed, 47 are less intact than they were two decades ago.

Scholtz and Twidwell also identified the largest area for which every grass-covered pixel was connected to at least one other such pixel. Dividing that area by the overall size of a grassland then gave the researchers what’s known as the largest-patch index. That index essentially measures how much of a grassland consists of an unbroken core as opposed to isolated patches. By that metric, 95.66% of the Sandhills is connected, with just 4.34% separated from that core. Most other grassland regions rate much lower on the metric.

“Knowing the regions that are the most intact, that have unique conservation and cultural value, we ought to be pumping conservation investments into them, because they’re experiencing unprecedented threats,” Twidwell said. “These regions survived the last 100 years of human pressure. Many won’t survive the next 100 years of pressure, we expect, unless we move past our current mindset and stop taking them for granted.”

The gravest immediate threat to the Sandhills is the encroachment of woody plants, especially the eastern redcedar tree, which threatens the livelihoods of ranchers and the survival of native species. Because more than 90% of the region is privately owned, Twidwell and various partners have appealed to those landowners for help in mitigating the spread of eastern redcedar.

As intact as they are, the Nebraska Sandhills have still given ground in the past 20 years. So, too, have the two other temperate grassland regions in North America that remain the most intact: the Flint Hills of Kansas and a short-grass prairie spanning parts of Montana, Wyoming and the Dakotas.

Twidwell’s collaboration with the U.S. Department of Agriculture’s Natural Resources Conservation Service did recently yield a national framework for conserving grasslands — the first of its kind in the United States. But he’s far from content and nowhere near complacent.

“The pace of collapse is far outpacing our strategy, our management,” he said. “Nobody has successfully proposed a plan to halt the collapse of this biome.

“The question becomes: Do we recognize why big, intact grasslands are valuable, what they provide, the culture that thrives with it? And are we going to finally start doing something to conserve their legacy? The Nebraska Sandhills represent one of the best chances in the world to do that.”